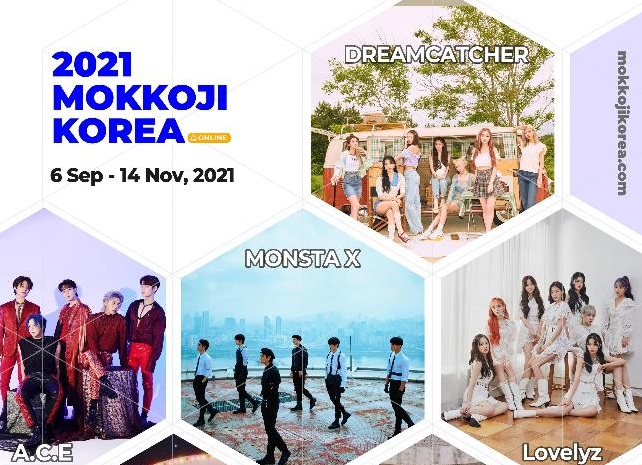 This image, provided by the Ministry of Culture, Sports and Tourism, shows the lineup of K-pop artists set to take part in “Mokkoji Korea.”

“Mokkoji Korea,” hosted by the Ministry of Culture, Sports and Tourism, and organized by the Korean Foundation for International Cultural Exchange, will run from Monday through Nov. 14, offering a variety of entertainment, interactive talks and contests for fans of hallyu, or the global popularity of Korean pop culture.

Mokkoji is a Korean term that refers to the gathering of people for games, parties and other occasions.

The festival’s organizers have chosen three “focus countries” this year — Russia, India and Indonesia — to promote cultural exchanges with those countries.

In its first week, the festival will focus on Russia and host programs where K-pop groups such as The Boyz, Lovelyz and CIX introduce South Korean beauty trends and customs observed during the Chuseok holiday, which falls on Sept. 20-22 this year.

On Sept. 12, the final day of the Russia focus week, participants in the two countries will be able to meet online at 6 p.m. to share each other’s lifestyles and cultures and stage K-pop performances.

Indonesia’s will follow from Nov. 8-14, with appearances by A.C.E. and Dreamcatcher.

Mokkoji Korea was originally conceived as an in-person hallyu festival involving “new southern” countries, which comprise India and the members of the Association of Southeast Asian Nations, and “new northern” countries, including Russia, Mongolia and other Eurasian states.

Due to the COVID-19 pandemic, however, the event was held online last year, with the participation of more than 2 million people from 165 countries, according to the ministry.

This year’s festival will be viewable at mokkojikorea.com. Details of the program can also be found on the site in English and the languages of the three focus countries.