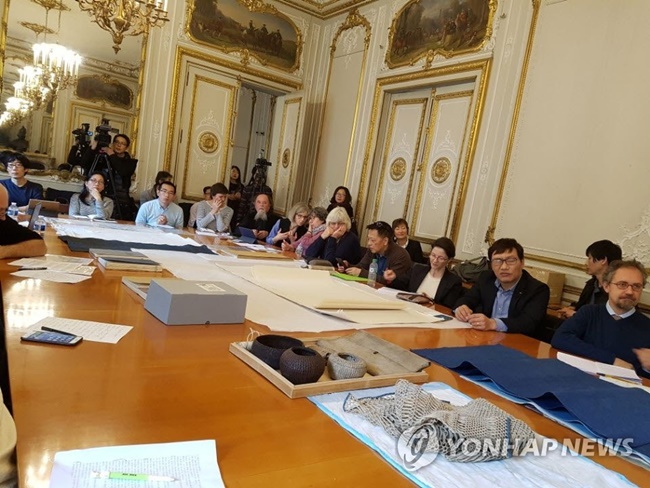 The hanji-making process is introduced at a Louvre Museum academic seminar in Paris on Nov. 23, 2017, in this photo provided by Mungyeong City. (Image: Mungyeong City)

During the meeting on Wednesday, Korean hanji master Kim Choon-ho gave a rundown of the hanji-making process, including the steaming, stripping and beating of “dak (paper mulberry),” the official said. Dak’s bark is a raw material for hanji.’

The city has globally promoted the excellence of its hanji since 2010, when Kim Min-jung, a Korean restorer of cultural assets at the Louvre, began to issue a thesis on it.

As a result, Ariane de la Chapelle, the head of the restoration team at the Louvre, visited the North Gyeongsang provincial city in February last year to inspect the traditional papermaking process.

Chinese paper conservators from Shanghai Museum also visited the city, and the Kyushu National Museum in Japan introduced hanji to Japanese people in 2012.

The British Empire and Commonwealth Museum and Italian cultural properties research center have also shown interest in Mungyeong hanji for the restoration of their cultural assets, the official added.