Undoubtedly, there are many people who cannot help but laugh right after they open a bag of potato chips, realizing that there is a bag full of air, not a bag full of chips. Defending themselves, snack makers contend that they use nitrogen gas as a filler to maintain freshness and crispness, as well as to prevent package collapse in handling and bacteria growth. But customers jokingly and cynically call such snacks full of air “nitrogen snacks.”

What is hilarious about so-called nitrogen snacks is that some college students attempt to cross over the Han River in Seoul in a snack bag raft in the afternoon on September 28. They already completed a test sailing in a bag raft with 60 snack bags taped up in a pond. This time, they are about to sail across the Han River using 180 snack bags, welcoming the donation of snack bags on the spot from anyone who complains about “nitrogen snacks.”

“We have planned this performance for the purpose of letting both snack makers and customers to think over the reality of “nitrogen snacks,” said one of the students, “it will be safe since bags will be taped up well and an emergency rescue crew will be on hand.”

“We have been complying with the government that regulates the bulk of filler gas to be lower than 35% of the entire content of a snack bag,” defended an official at one snack industry whose snack bags are going to be used for the raft. 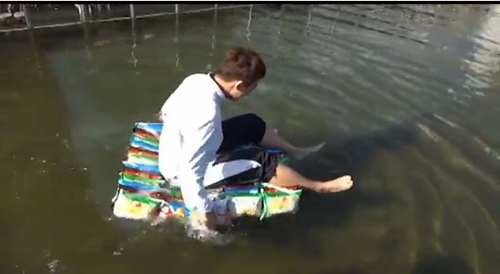