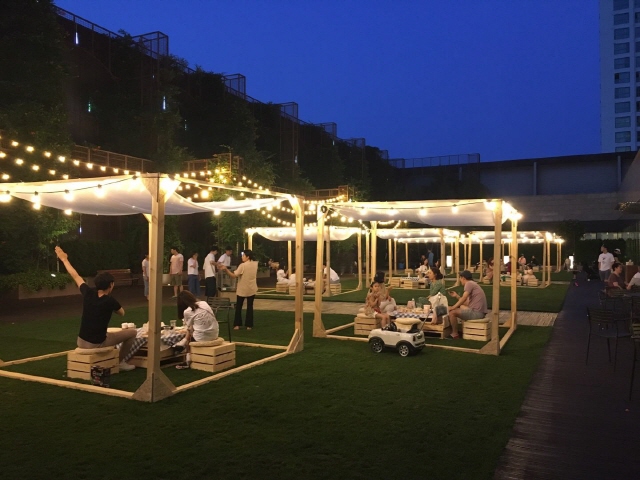 SEOUL, Aug. 5 (Korea Bizwire) — The sizzling summer temperatures and tropical nights are having an effect on the spending patterns of consumers.

More and more consumers are shopping at night or in the evening, when the weather is relatively cool. In addition, an increasing number of consumers are placing orders online.

Hyundai Department Store said its sales during the 6 p.m. to 8 p.m. period rose 16 percent from the same period last year, based on an analysis of sales from July 12 to last Thursday.

The department store credited the increase to its strong marketing strategy to attract customers who enjoy shopping in the early evening hours to escape the sweltering heat.

Consumers tired of the heat of summer nights chose to place online orders for bulky, heavy grocery shopping rather than visiting the stores themselves.

According to an analysis of sales for a week from July 24, sales of fresh food rose 10.2 percent and those of processed food rose 10.1 percent from 9 p.m. to 3 a.m., compared to the same period in the previous month.

With the number of “night owl shoppers” increasing, retailers are scrambling to extend their business hours or start marketing during the night.

E-Mart extended the closing time of some stores by 30 minutes until August 18, while Lotte Mart decided to remain open one hour later and close at midnight.

As the rainy season has ended and the onset of sweltering summer heat has begun, more consumers are expected to choose to shop late in the evening or late at night to avoid the heat, said an official in the retail industry.