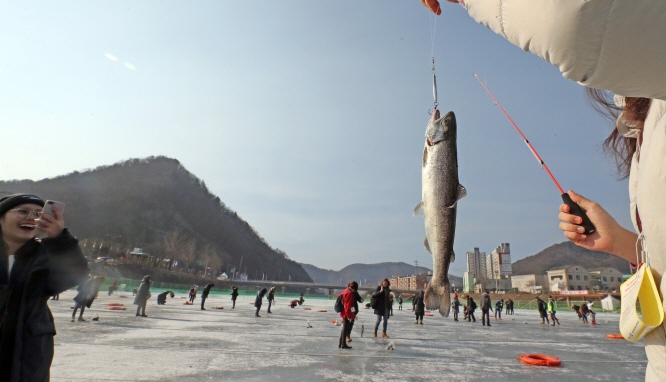 HWACHEON, Jan. 21 (Korea Bizwire) — The 2020 Hwacheon Sancheoneo Ice Festival, hit by unseasonably warm weather this winter, reopened to foreign visitors on Tuesday, about one week ahead of its formal opening.

The popular festival was originally scheduled to kick off on Jan. 4 on a frozen river in the Gangwon Province county of Hwacheon, about 120 kilometers northeast of Seoul, but has been delayed by several weeks due to unseasonably warm weather.

To avoid confusion among foreigners who had already booked flights or tour packages, Hwacheon’s county government opened the festival only to foreign visitors from the original opening date.

But the foreigners-only ice fishing program was suspended days later due to weather problems.

As temperatures fell sharply in the morning and evening this week and ice thickness at the festival site reaches 20 centimeters, however, the organizers reopened the foreigners-only ice fishing site Tuesday morning.

They expect about 10,000 individual and group foreign tourists to visit Hwacheon on the first reopening day.

Korean visitors are invited to enjoy the annual ice fishing festival from next Monday.

Approximately 20,000 fishing holes will be pierced through the ice over a 2.1-kilometer area about the size of 24 soccer fields, and about 200 tons of “sancheoneo” will be released during the festival.

Sancheoneo is a species of trout known to live only in very clean fresh water.

Launched in 2003, the event was chosen as the nation’s best festival by the culture ministry in 2010 and has developed into one of the world’s four major winter festivals.