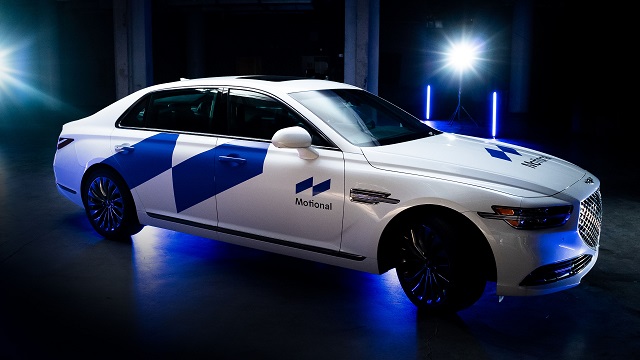 This file photo provided by Hyundai Motor shows a G90 flagship sedan with the logo of the Motional brand.

Motional said it plans to deploy fully autonomous vehicles, which are based on the Korean automaker Hyundai Motor’s platform, in Lyft’s ride-sharing network in the United States.

Lyft has the second-biggest ride-sharing network in the world’s most important automobile market after Uber Technologies Inc.

Recent U.S. research showed that 70 percent of Americans said the risk of coronavirus infection affects their transportation choices, and 1 out of 10 Americans are more interested in driverless vehicles than they were before the pandemic, Motional said.

In October, Motional partnered with U.S. on-demand shuttle startup Via to launch a shared robotaxi service in the U.S. next year.

In the partnership, Motional’s self-driving vehicles will serve as on-demand, shared robotaxies based on Via technology that covers booking, passenger and vehicle assignment and identification, and fleet management.

Motional, headquartered in Boston, plans to develop a self-driving vehicle platform with Level 4 to 5 autonomous technology by 2022 and supply it to global carmakers.