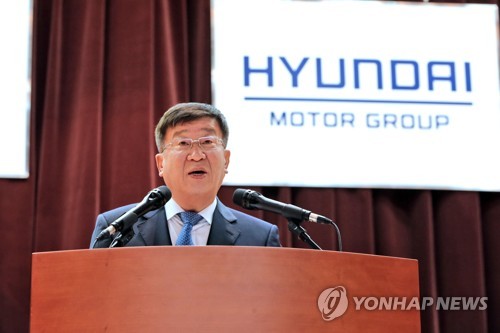 Hyundai Motor Co. and its affiliate Kia Motors Corp. have set an annual sales target for this year, after missing their combined sales goal of 8.25 million cars last year, the group said in a statement.

The group aims to have 38 kinds of environment-friendly vehicles in its lineup, including 14 pure electric cars, by 2025.

In regards to the annual sales targets, Hyundai Motor Vice Chairman Yoon Yeo-chul said in New Year speech to employees that the group expects weak global growth this year due to shrinking demand in the United States, China and Europe.

The sedan-heavy automaking group is belatedly beefing up its lineup with sport-utility vehicles to meet the growing demand. It is now putting a bigger focus on reviving sales by launching new and upgraded SUVs this year mainly in major markets such as the U.S. and China.

In 2017, the two carmakers likely sold an estimated 7.2 million units globally as their sales in China were hit hard by a diplomatic row with the world’s biggest automobile market over the deployment of an advanced U.S. anti-missile system in South Korea.

Seoul and Beijing agreed in October to put their exchanges back on track, easing bilateral political tensions over the installation of the missile defense system, called THAAD, which the latter argued could be used against it.

Hyundai and Kia will announce their 2017 sales results later on Tuesday.