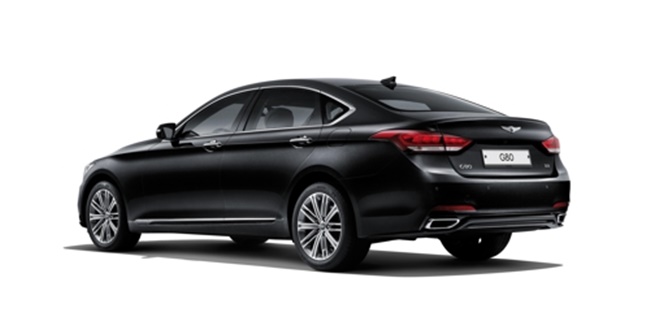 The standalone brand launched the latest version of the G80 sedan equipped with either a 3.3-liter, a 3.3-liter turbo-charged, or a 3.8-liter gasoline engine, the carmaker said in a statement. (Image: Hyundai Motor)

The standalone brand launched the latest version of the G80 sedan equipped with either a 3.3-liter, a 3.3-liter turbo-charged, or a 3.8-liter gasoline engine, the carmaker said in a statement.

The newly added model to the G80 lineup is a 3.3-liter powered car that fields a sporty look. The refreshed Genesis comes with all the safety and driver assist systems found in the previous model plus full LED headlamps and self-closing doors. The upgraded G80 models are priced at 49 million won (US$43,500) to 69 million won, it said.

The Genesis lineup includes the G70, G80 and G90 sedans being sold separately from vehicles available under the Hyundai marque.

The latest move by the automaker comes as part of its latest efforts to raise the competitiveness of Hyundai cars across the board amid declining orders in major markets such as China and the United States.

In the January-September period, Hyundai sold a total of 511,740 vehicles in the U.S., down 13 percent from 587,688 units a year earlier. Sales data for China was not available as of Monday.

Its global sales fell 6.0 percent in the first nine months to 3.27 million autos from 3.48 million units a year earlier due to lower demand from China, the world’s largest automobile market.