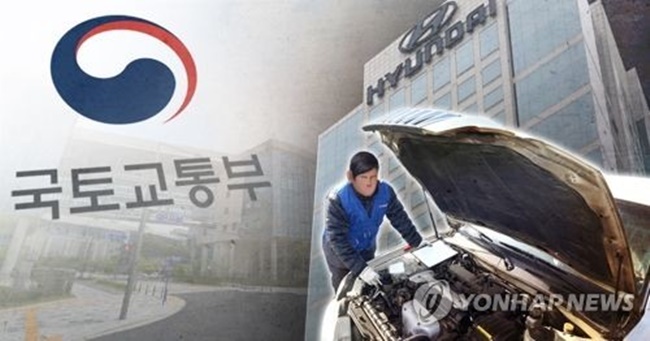 Hyundai Motor and others were instructed to recall 930,865 units encompassing 54 vehicle types, the Ministry of Land, Infrastructure and Transport said. (Image: Yonhap)

Hyundai Motor and others were instructed to recall 930,865 units encompassing 54 vehicle types, the Ministry of Land, Infrastructure and Transport said.

As many as 4,059 Jaguar FX sedans and 515 Jeep Renegade compact SUVs will also be recalled for faulty instrument boards.

Mercedes-Benz Korea will recall 186 Mercedes-AMG C63 sedan and coupes over a failure in their electronic stability program and nine S350 BlueTEC vehicles for defective safety belts.

A total of 931 Comet 650 motorbikes will also be recalled because of faulty clutches that may cause engine oil leaks.

The automakers in question are required to inform the owners of the vehicles to be recalled by e-mail or text message.

People who had the defects in their cars fixed on their own are eligible for compensation from the automakers.

The ministry advised owners of vehicles to visit the recall center at www.car.go.kr to get information on the recalls.