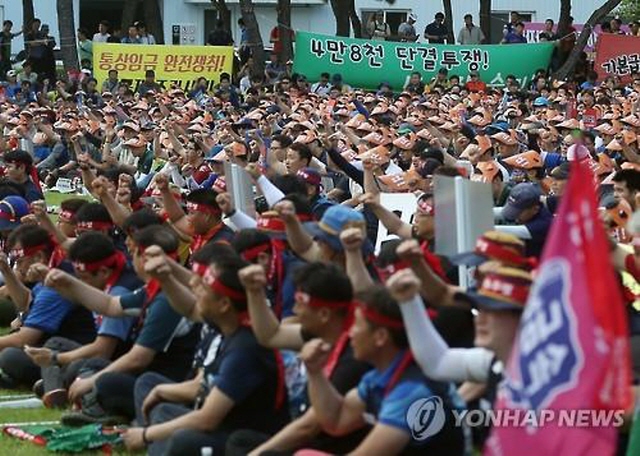 Last week, a majority of the automaker’s some 48,000 unionized workers voted for a strike as their talks with the company’s management over a wage increase and other issues ruptured.

Their partial walkout will be staged for four hours from 1 p.m. later in the day, and the workers will also put down their tools for four hours a day on Wednesday, Thursday and Friday.

Hyundai Motor estimates some 40 billion won (US$35 million) a day in production losses due to the partial strike.’

Also, employees at Hyundai Heavy Industries Co., a major shipyard in the country, will stage a strike for four hours on Tuesday, demanding that the company’s tough restructuring move, including a cut in workforce, be scrapped.

Their partial walkout will also take place on Wednesday and Friday.

Workers at the two companies will hold a joint strike on Wednesday in Ulsan, where their factories are located.

Hyundai Motor has been facing increased competition at home and abroad, losing presence in the domestic market in particular.

Hyundai Heavy is one of three local shipbuilders struggling with severe financial strain since the 2008 global economic crisis that sent new orders tumbling amid a glut of vessels and tougher competition from Chinese rivals.

The country’s top three shipyards suffered a combined operating loss of 8.5 trillion won (US$7.4 billion) last year due largely to increased costs stemming from a delay in the construction of offshore facilities and an industry-wide slump, with Daewoo Shipbuilding alone posting a 5.5 trillion won loss.

The shipbuilders have recently drawn up sweeping self-rescue programs worth 10.35 trillion won in a desperate bid to overcome a protracted slump and mounting losses.

Meanwhile, the country’s business circle urged the labor sector to scrap the planned strike as their moves are politically motivated.

“On the surface, they claim that their strike is a result of the failure of wage negotiations, but their moves are aimed at nullifying government policies and restructuring moves,” said the Korea Employers Federation.

In regards to the joint strike by workers at shipyards, the federation claimed their salaries are higher than in other segments, and their planned walkout cannot be justified.