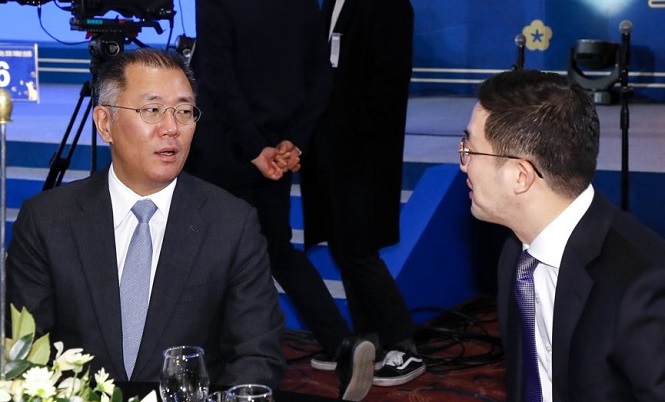 LG Chem has supplied lithium-ion car batteries to Hyundai Motor’s all-electric vehicles, such as the Kona EV and the Ioniq Electric. It has been recently designated as a battery supplier for Hyundai’s next-generation EV to be launched in 2022.

Moreover, Hyundai Motor and LG Chem have agreed to explore overseas startups with advanced technologies in the EV and car battery fields to expand into the highly potential businesses.

It will be the first time for Chung and Koo to have an official meeting. Chung, heir apparent of Hyundai Motor Group, has led the group since September 2018, when he was promoted to the current position.

Koo took the helm of LG Group, a chemicals-to-electronics conglomerate, in 2018.

Samsung SDI is a Samsung subsidiary that manufactures car and smartphone batteries.

Hyundai Motor Group is pushing to mass produce an electric car based on its own EV platform called the electric-global modular platform (E-GMP) next year.

The new platform will be installed in Hyundai Motor’s new large EV under the project name NE and its smaller affiliate Kia’s new crossover utility vehicle.