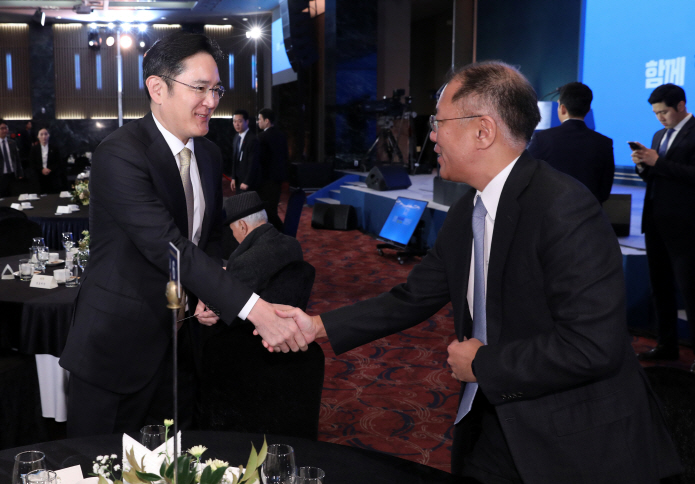 The meeting took place at Samsung SDI Co.’s plant in Cheonan, about 90 kilometers south of Seoul. Samsung SDI is a Samsung subsidiary that manufactures EV and smartphone batteries.

It marks the first time that Lee, also Samsung Electronics vice chairman, has held a business meeting with Chung of auto giant Hyundai Motor Group, the No. 2 business group in South Korea.

In early March, Samsung Electronics said its researchers have developed all-solid-state battery technology that is more efficient than existing ones.

Compared with lithium-ion batteries that are widely used in EVs, all-solid-state batteries boast greater energy density and are safer, as they utilize solid electrolytes instead of liquid electrolytes, according to Samsung.

Samsung said using such technology would enable an EV to drive up to 800 kilometers on a single charge with a life cycle of over 1,000 charges.

Hyundai Motor Group is pushing to mass produce an electric vehicle based on its own EV platform called electric-global modular platform (E-GMP) next year. 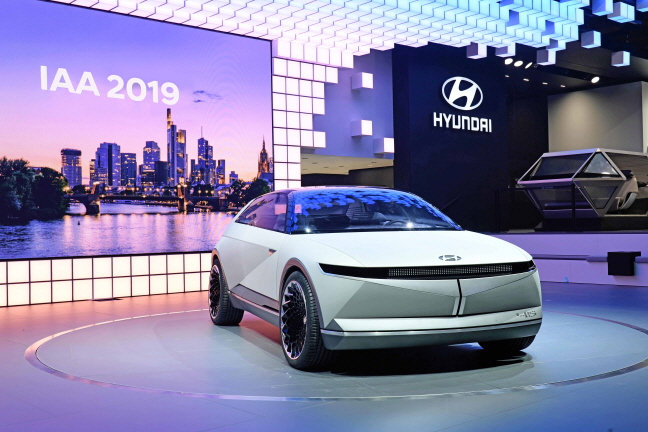 At the end of last year, Hyundai Motor Group signed a 10 trillion won (US$8.2 billion) deal with SK Innovation Co., another South Korean EV battery maker, to purchase batteries for 500,000 EVs over the next five years.

According to industry data, combined EV sales of Hyundai Motor and Kia Motors came to slightly over 24,000 units in the first quarter of the year, the fourth largest in the world after Tesla, the Renault-Nissan alliance and Volkswagen Group.

The meeting between Lee and Chung comes as South Korea is ramping up efforts to promote the EV industry in line with the Korean version of the New Deal that also focuses on nurturing the system semiconductors and bio-health sectors.

Industry watchers said the one-on-one talks between the heirs of the two leading conglomerates will likely help deepen their strategic partnership down the road.

“Strategic cooperation between Samsung and Hyundai Motor, which have emerged as global IT and auto powerhouses, is expected to provide South Korea with an opportunity to pioneer the global mobility industry,” an industry source said.