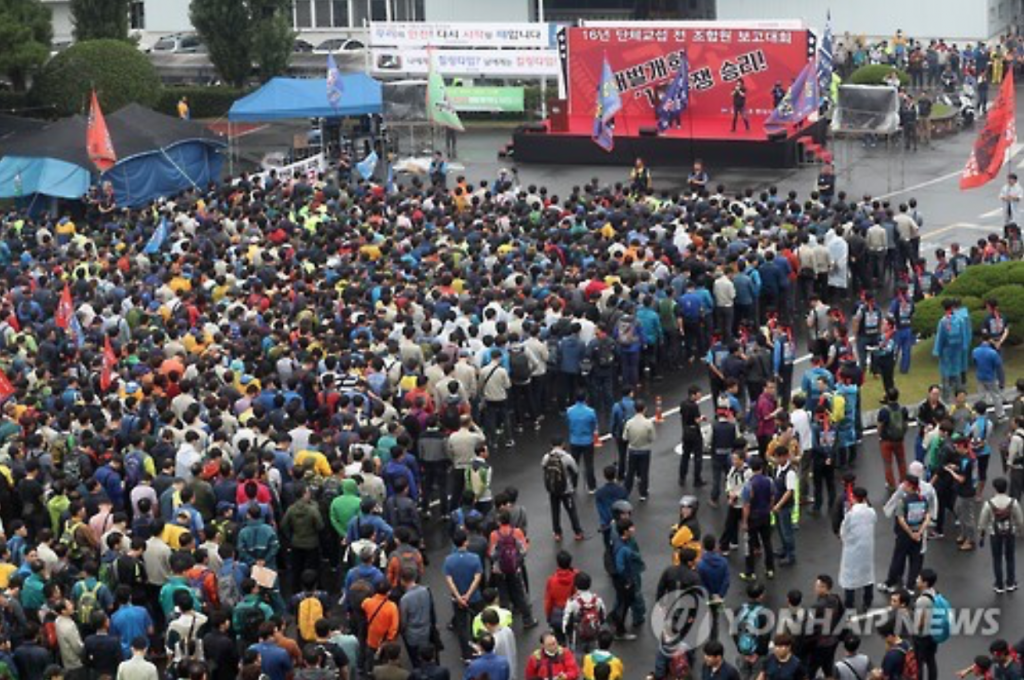 Although there will be no walkouts, the union said its senior members will assemble at Hyundai Motor’s main factory in Ulsan and the automaker’s headquarters in Seoul to protest against the management’s proposals. (image: Yonhap)

ULSAN, Oct. 5 (Korea Bizwire) – Unionists of Hyundai Motor Co. said Tuesday they will not stage a walkout this week, although their senior members will continue protesting against the management over wage deals.

The unionized workers at South Korea’s top automaker said they will not lay down their tools until next Tuesday. However, they threatened to go on strike again if their wage negotiations don’t reach an agreement with the management during the next seven days.

Although there will be no walkouts, the union said its senior members will assemble at Hyundai Motor’s main factory in Ulsan and the automaker’s headquarters in Seoul to protest against the management’s proposals. They will also visit the Ulsan Municipal Government and the Ministry of Employment and Labor in Sejong to stage a rally to show discontent against the government’s plan to stop their labor actions.

Under existing law, the country’s labor minister can call for an emergency adjustment when a labor dispute is related to public services that can endanger the national economy or the daily lives of the general public. If enacted, concerned parties are required to immediately suspend walkouts for the following 30 days.

The union said if the government decides to invoke its emergency arbitration right, its senior members will immediately have a meeting to discuss plans for a walkout.

The union has launched 24 strikes since July 19, costing the firm 2.9 trillion won (US$2.6 billion) from the lost production of some 131,100 cars, according to the management. It has asked the union to resume the wage negotiations this week.

The two sides had reached a tentative agreement on Aug. 24 that would have raised the workers’ monthly wages by 58,000 won plus a bonus of 350 percent and 3.3 million won in cash for each worker.

The compromise, however, was rejected by unionists, with 78.05 percent of the nearly 50,000 members voting against it.