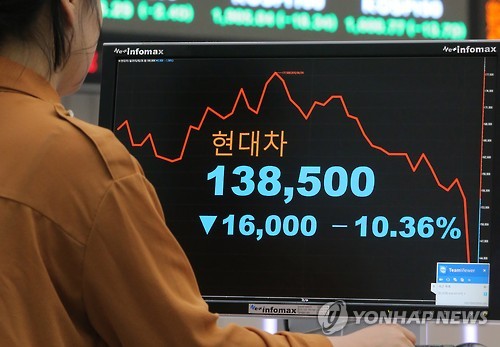 SEOUL, June 3 (Korea Bizwire) – Hyundai Motor, a bellwether for Korea’s economy along with Samsung Electronics, saw its stock price collapse more than 10 percent to its lowest level in 57 months on June 2.

With the stock price dive, about 3.5 trillion won of market value was vaporized in a day. Recently, Hyundai Motor slipped a step to Korea’s third-largest firm by market value, giving way to SK Hynix on May 27. Now, it should worry about falling to fourth place as the difference with KEPCO is only about 1 trillion won.

Market watchers expect that worry among the automakers will deepen as the yen keeps falling. As the Korean automobile industry competes mainly with Japanese manufacturers, the low yen directly damages the industry. The day of Hyundai’s stock nosedive, yen-dollar exchange rates fell to 125 yen per dollar, the lowest since early December 2002. The won-yen arbitrated rate closed at nearly 890 won per 100 yen.

With the falling yen, Hyundai Motor reported on June 1 that its sales fell 6.4 percent in May from a year earlier, as it sold 54,990 units in Korea and 334,309 units overseas.