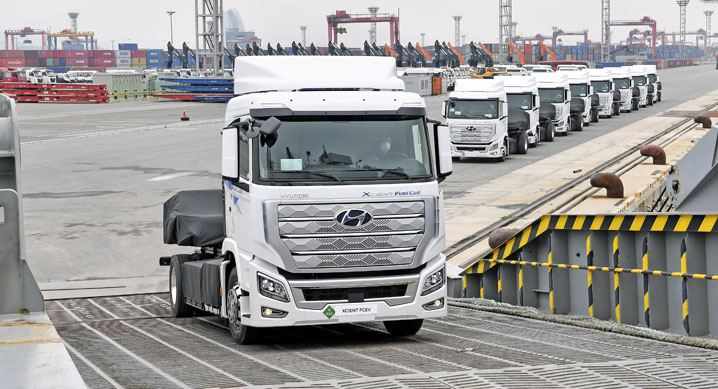 This photo taken July 6, 2020, and provided by Hyundai Motor shows XCIENT Fuel Cell hydrogen trucks being loaded onto the Global Superior roll-on, roll-off ship heading to Switzerland at a port in Gwangyang, 423 kilometers south of Seoul.

Hyundai Motor plans to deliver 40 additional XCIENT Fuel Cell hydrogen trucks to the European country by the end of this year as part of its long-term contract to export a total of 1,600 XCIENTs to the country by 2025, the company said in a statement.

“Hyundai has started the mass production of large-size hydrogen trucks and sold the products for the first time in global markets. It will help the company cement its leadership in commercial hydrogen vehicles,” a company official said.

The XCIENT hydrogen truck can travel about 400 kilometers on a single charge, and it takes about eight to 20 minutes to fully charge the truck, the statement said.

The 10 hydrogen trucks will be operated by Hyundai Hydrogen Mobility, a 50:50 joint venture set up last year between Hyundai Motor and Swiss hydrogen solutions provider H2 Energy, it said.

To help improve the infrastructure for hydrogen vehicles, the H2 Mobility Swiss Association plans to establish seven hydrogen charging stations by December and 73 additional ones by 2025, Hyundai said.

In its report released in September 2018, the global consulting firm McKinsey projected a total of 3 million to 4 million hydrogen trucks will be supplied globally by 2030. 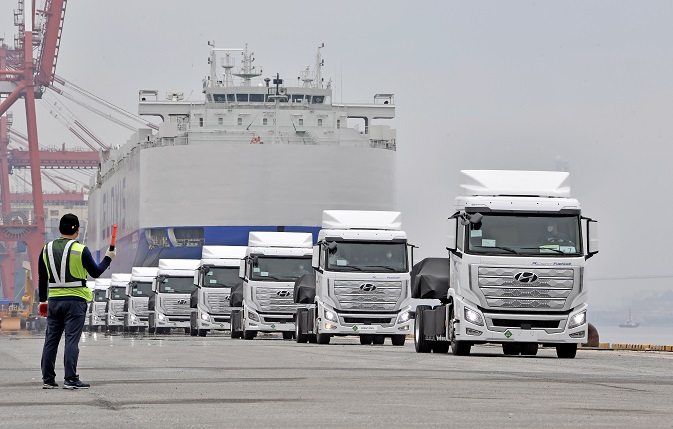 Particularly in Europe, there is growing demand for zero-emission commercial vehicles as Norway and some other countries are moving to ban the sale of combustion engine vehicles from 2025, the statement said.

Hydrogen can be produced by processing liquefied natural gas or as a byproduct of industrial facilities, including petrochemical plants.

Starting with the shipments to Switzerland, Hyundai aims to advance to the commercial vehicle markets of other European markets such as Germany, the Netherlands, Austria and Norway as well as the United States.

In the long term, Hyundai plans to introduce a large-size tractor unit that can travel more than 1,000 km per charge based on the hydrogen truck concept Neptune, which was unveiled at the 2019 North American Commercial Vehicle Show in Atlanta in November.

In 2018, Hyundai Motor Group announced that it will invest 7.6 trillion won in hydrogen car-producing facilities and related R&D activities by 2030. Under the plan, the group plans to churn out 500,000 hydrogen vehicles in 2030.

On the passenger vehicle side, Hyundai sold 9,228 Nexo hydrogen cars — composed of 7,533 units domestically and 1,695 overseas — in global markets from 2018 through June this year.