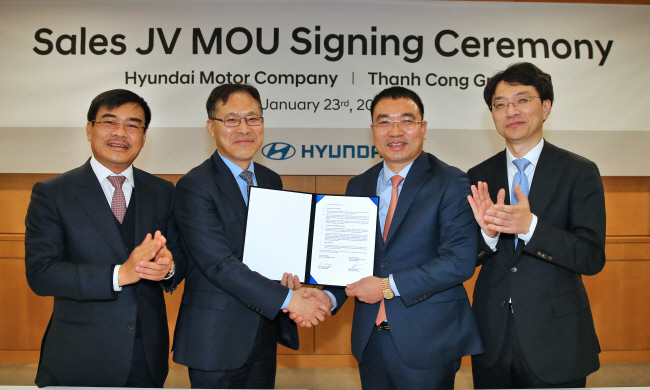 SEOUL, Jan. 24 (Korea Bizwire) — South Korean carmaker Hyundai Motor Co. said Thursday it will set up a joint venture with a Vietnamese company to boost sales in the emerging market.

Hyundai Motor and Thanh Cong Group signed an initial agreement to establish a sales JV that will be tasked with selling 100,000 vehicles in Vietnam by 2020, the company said in a statement.

For the whole of 2018, Hyundai’s vehicle sales more than doubled to 55,924 units in the key Southeast Asian market compared with a year earlier. It ranked second in the local automobile market with a share of 19.4 percent after Toyota Motor Corp., the statement said.

In a production JV with Thanh Cong Group, Hyundai has been bringing complete knockdown units from its plants in South Korea since 2011 for assembly at the Vietnamese assembly line for sales in the country.

Hyundai Thanh Cong Manufacturing Vietnam has assembled models that include the i10 mini car, the Accent subcompact, the Elantra compact, and the Tucson and Santa Fe SUVs, the statement said.