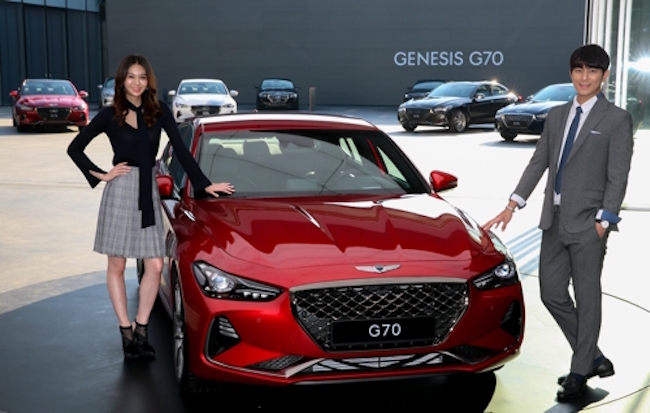 In the two-hour-long test-drive event, the 3.3-liter V6 gasoline twin-turbo in the G70 Sport showed what it was made of on a 130 kilometer course from eastern Seoul to Pocheon, just north of the capital city. (Image: Hyundai)

POCHEON, Sept. 20 (Korea Bizwire) — At a glance, the G70, launched as a BMW 3 series and Mercedes-Benz C-class challenger by Hyundai Motor Co.’s independent luxury Genesis marque, seems too “sedate,” but it easily proved it has the performance to take on the established heavyweights.

The signature hexagonal mesh front grille with a chrome outline clearly shows it is part of the ever-growing Genesis lineup. But it looked conservative in terms of overall design despite a distinctive long bonnet and short rear overhang.

The G70′s exterior design is a combination of soft curves and sharp angles. Moving to its side, the profile follows the “long hood, short deck” look, with the shoulder line being pulled outwards, giving the car a wide and aggressive stance.

In the two-hour-long test-drive event, the 3.3-liter V6 gasoline twin-turbo in the G70 Sport showed what it was made of on a 130 kilometer course from eastern Seoul to Pocheon, just north of the capital city.

The new G70 is a smaller car in all aspects compared to Genesis’ G80 and G90 yet it is just as powerful as the similarly sized BMW 3 series and Mercedes-Benz C-class vehicles.

It is shorter at 4,685mm compared to the 4,830mm of Hyundai affiliate Kia Motors Corp.’s Stinger sports sedan, with its length similar or slightly shorter than the German rivals. It also sits closer to the ground at 1,400mm than its competitors.

The G70 offers three powertrains, including the 2.0-liter gasoline turbo and the 2.2-liter diesel turbo, in the domestic market. The G70 Sport can accelerate from zero to 100 kph (62.5 mph) in 4.7 seconds and doles out 365 horsepower and 52 kilogram-force meters of torque.

In an 82 km expressway trip, the V6 proved that it has the credentials to enter the very competitive midsize luxury sedan market.

In sport mode, it can catapult forward and responded immediately to throttle input with the excellent brakes providing an extra measure of confidence. Cornering at high speeds was stable without any lean, helped by 19-inch wheels.

But backseat legroom and headroom are restrictive for a relatively tall person, as the G70 Sport is tailored more towards singles and young couples.

A Hyundai Motor engineer who joined the test drive said the company focused on providing a high-performance car with the Genesis badge for “fun driving” at the expense of some internal space being the only “trade-off.”

The G70, the third sedan in the Genesis lineup, is designed to not only help the carmaker strengthen its presence in the luxury segment but also to make up for its lack of a competitive SUV model.

The company expects the G70 will help the new brand grow and expand further in major markets such as the United States. The top model is priced at 52 million won (US$46,000), compared to 56 million won for the BMW 330i M sports sedan in the Korean market.

The carmaker said it plans to launch the G70 in the large U.S. market early next year, although it has yet to decide when it will introduce the latest Genesis sedan in Europe and China.