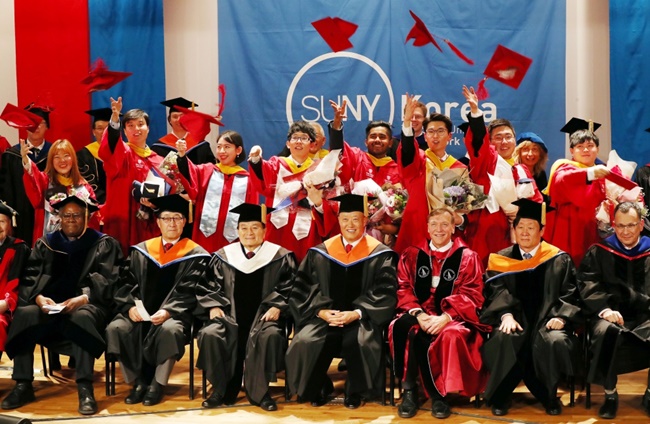 According to Incheon Global Campus on Thursday, a growing number of students are graduating from the one and only education model in South Korea where renowned courses from a number of international universities are on offer. (Image: Yonhap)

SEOUL, Dec. 14 (Korea Bizwire) – Students from Incheon Global Campus are graduating for the first time this year and finding employment at multinational corporations such as LG Electronics and Facebook, signaling signs of progress.

According to Incheon Global Campus on Thursday, a growing number of students are graduating from the one and only education model in South Korea where renowned courses from a number of international universities are on offer.

Graduates have been hired by Korean Air, LG Electronics, Facebook and other renowned companies including semiconductor manufacturers, giving a boost to the campus’ competitiveness.

Beginning with State University of New York Korea, from which an undergraduate student graduated for the first time in January, more and more South Korean and international students are graduating.

A total of 17 students formed the graduating class of 2017 from the University of Utah Asia Campus in May, becoming the first group of people to compete a course from the Asian campus of the American university located in the smart city of Songdo.

Similarly, George Mason University Korea is set to hold its very first graduation ceremony on Saturday with 17 students this year.

SUNY Korea boasts the highest number of graduates within the campus, with a total of 108 students having completed a degree program, including 39 undergraduates, 68 postgraduates, and one PhD graduate.

Incheon Global Campus, which began as a joint project between the Ministry of Trade, Industry and Energy and Incheon Metropolitan City Government, got its start when SUNY Korea opened a postgraduate school in 2012.

George Mason University, Ghent University, and the University of Utah followed suit, with over 1,700 students including 157 international students from 40 countries currently studying at Incheon Global Campus.