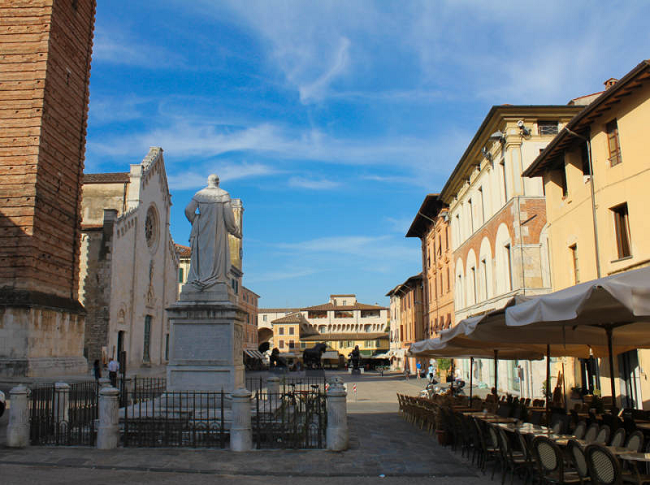 Rome, Aug. 16 (Korea Bizwire) – The Korean Cultural Center in Italy announced that it had held a “Korean Day” event in the popular tourist destination Pietrasanta on August 14.

Sometimes called the “City of Artists”, the medieval town is famous for its legacy of art and sculpture.(Image: Department of Culture, Pietrasanta)

Sometimes called the “City of Artists”, the medieval town is famous for its legacy of art and sculpture.

Residents and visitors to the town were able to try on hanbok, traditional Korean clothing, and practice Korean calligraphy at the Church of Saint Agostino. The church serves numerous functions as a center for religious rites and includes space dedicated to a library and a museum.

The church also had photos of the upcoming 2018 Winter Olympics in Pyeongchang on display. (Image: Korean Cultural Center)

Over in the town square meanwhile, the sound of music undoubtedly new to many Italians’ ears could be heard. Kim Deok Su and his Samulnori Band performed Korean traditional music before an audience of more than 400, to enthusiastic rounds of applause.

Even the background visuals of the city added to the Korean flavor of the day, as sculptor Park Eun Sun’s works had been on display in the heart of the city since August 11.