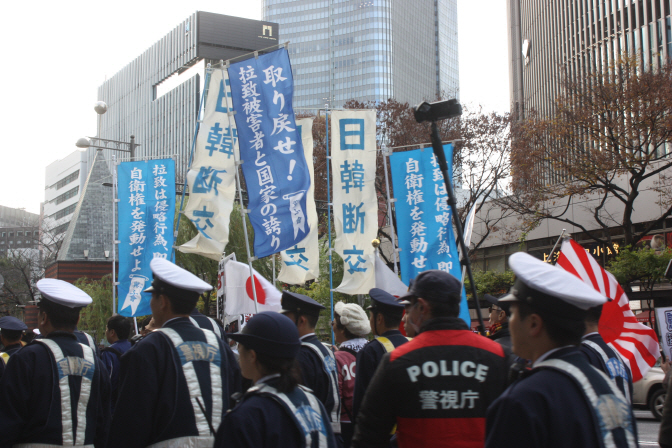 A group of Japanese far-right activists staged an anti-Korean demonstration in Tokyo on Dec. 9, 2018 (Yonhap)

Last Sunday, one South Korean netizen shared a fake news article most likely written by a Japanese individual on a local online community.

“The news articles on the website are either false or just ridiculous,” said the netizen.

“It sometimes comes up as one of the top search results on Google, so make sure the website is not mistaken for an authentic news source.”

The website is being shared throughout various online communities and social networks.

‘Korean News,’ which is the name of the website, is a blog that sparked controversy after posting offensive and groundless articles about South Korea between November 2016 and January 2017.

All 63 of the articles posted on the website pose as ‘authentic’ news articles that include police announcements and public reactions, all of which are fake.

“Our objective is to widely distribute the news about South Korea,” says the website. “We don’t spend a single day not creating the newest information. It is our objective to change society.”

The blogger, in order to stimulate anti-Korean sentiment in Japan, first created the ‘Korean News’ website, and made a Japanese version of the website to use fake articles on ‘Korean News’ as ‘reference’.

The problem continues, however, as the fake articles are still being shared online.

One news article that slanders the late former South Korean president Roh Moo-hyun has recently been shared on a Japanese online community, encouraging viewers to join the anti-Korean sentiments.

There are other articles that make preposterous claims that the South Korean police conducted investigations into a food company for processing human meat, or a Korean celebrity who sexually abused his daughter and made her give birth to four children.