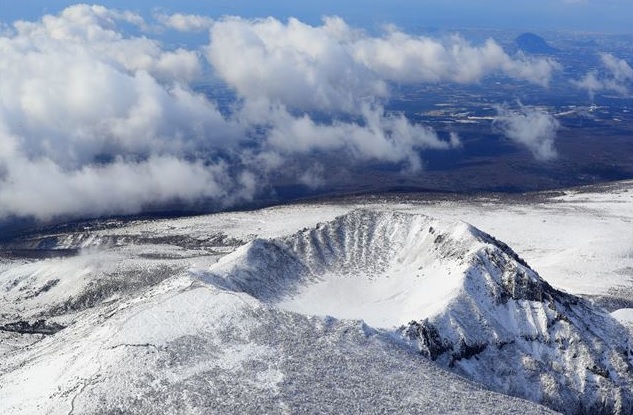 This provided photo shows Baekrokdam Lake, which sits at the top of Mount Halla on South Korea’s largest island of Jeju, covered with snow on Jan. 25, 2017. The 1,950-meter dormant volcano, a UNESCO-designated world natural heritage site, is the highest peak in South Korea.

Jeju, Jan. 21 (Korea Bizwire) — llegal transactions of QR codes given out free of charge by Jeju provincial government for making reservations for tourist programs on Mount Halla, the southern island’s iconic volcanic peak, have brought the provincial government to take legal action, only to find out there is nothing it can do at the moment.

Demand for the tourist program spiked after a celebrity was seen climbing the South Korea’s tallest mountain on a recent television show.

Last year, the tourist program began accepting guests with reservations only, turning away all others coming to see the mountain.

The program accepts up to 1,500 reservations per day to climb to Baekrokdam Lake, the highest peak in South Korea, from two different routes.

Travelers can get a QR code for reservation at the Mount Halla website or by phone before the mountain opens up for travelers on the preferred date.

The problem, however, is that these QR codes are being put up for sale illegally online. QR codes can be captured as screenshots and shared with others for actual use.

In response, the Jeju provincial government announced that it will take legal actions against all illegal QR code transactions.

Currently, however, there are no legal provisions or ordinances that restrict QR code sales.

As such, the provincial government is taking measures to first replace the reservation system that uses QR codes.

Using a QR code inscribed with a different person’s private information can be subject to legal punishment for violating the Resident Registration Act.

The provincial government plans to impose a 12-month ban on both sellers and buyers of illegally shared QR codes.