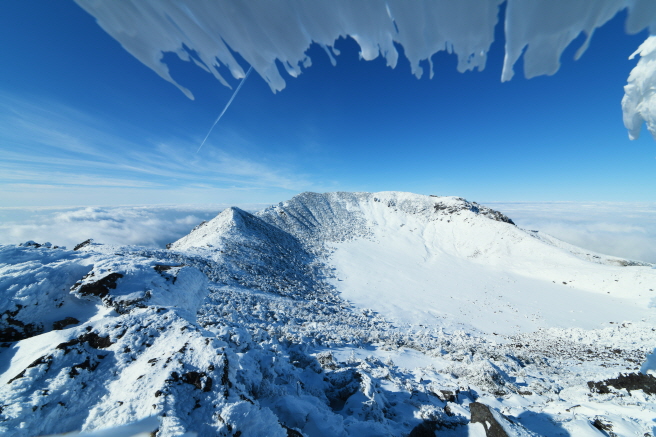 The Jeju government said it plans to enforce a pilot reservation system for hikers and tourists hoping to reach the 1,950-meter-high Baekrokdam, a crater lake on Halla, from February to December this year to better protect its ecology and prevent environmental pollution.

Of them, the Seongpanak and Gwaneumsa trails, the only two courses leading directly to Baekrokdam, will be affected by the reservation system, the provincial government said.

Under the new policy, only 1,000 visitors a day will be permitted to access Seongpanak Trail, the longest and gentlest trail that takes three to four hours one way, and 500 visitors for Gwaneumsa Trail, a steep but scenic trail.

Reservations for the two trails can be made online or by phone on a first-come, first-served basis. The three other trails will remain open to all hikers.

The provincial government said the reservation system is being introduced, as the scenic Jeju mountain’s ecology and environment have been threatened by a rapid growth in hikers and tourists.

Congestion on mountain roads and a severe shortage of parking space have also caused headaches for the authorities.

Indeed, the number of visitors to the five Mount Halla trails reached a record 1.25 million in 2015 after topping 1 million in 2000.

The visitor numbers have fluctuated since then, ranging from 1.06 million in 2016 to 840,000 last year, but the proper capacity has already been exceeded, triggering growing calls for regulating the number of visitors.

The Jeju government said it will formally implement the reservation system for Halla hikers next year after the 11-month pilot period.

In addition to the reservation system, the government will push to build a large transfer parking lot for Halla hikers at the foot of the mountain.