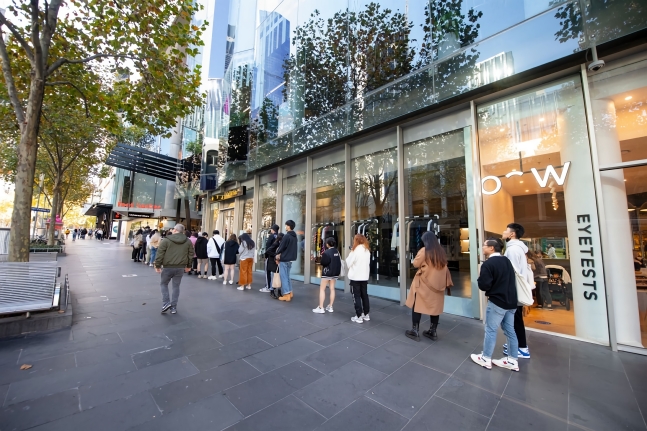 People wait in long lines in front of a ADLV shop in Lonsdale Street in Melbourne, Australia to buy clothes in this photo provided by South Korean clothing brand.

SEOUL, July 13 (Korea Bizwire) — South Korean fashion brands that have infiltrated the hearts of the MZ generation are leading the K-fashion craze overseas.

The company said that crowds were seen lining up in front of the store as early as the day before the grand opening.

Andersson Bell became one of the few South Korean fashion brands ever to succeed in the European luxury fashion and shoe market. Last year, Net-a-porter, Britain’s luxury fashion store, sold 92 percent of the goods it had purchased from Andersson Bell.

These companies are miniature brands based in Dongdaemun area in central Seoul that used to be a part of the country’s nonmainstream fashion industry.

Many of their products, sold wholesale from Dongdaemun market, used to end up on cheap online shopping portals.

However, the circumstances began to change after online stores surpassed offline stores in overall sales, with the MZ generation rising as a new group of consumers.

Their popularity in the overseas market is also led by the Korean Wave.

As many Korean celebrities are being hired as models for foreign luxury brands, the clothes they wear, including those made by South Korean fashion brands, are also being treated as luxury items.

The company opened a pop-up store in Japan early this year and was listed on Zozo Town, Japan’s largest online fashion mall.