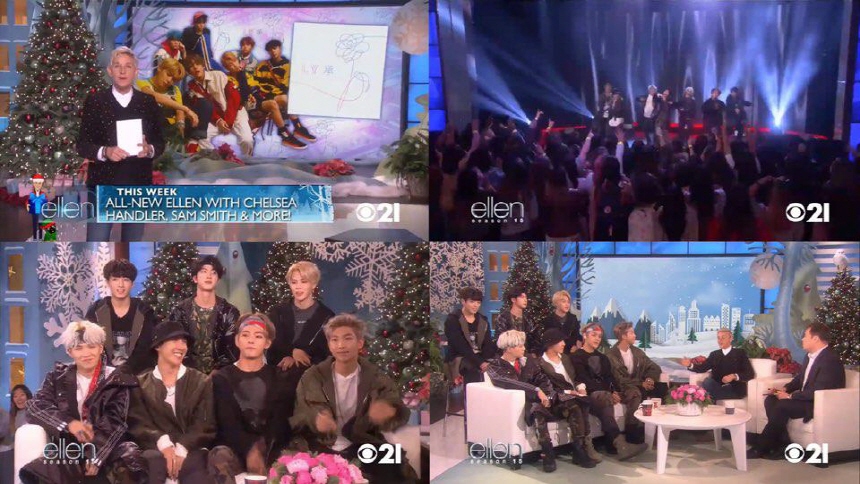 The pre-taped broadcast was aired Monday afternoon (local time) and featured the group’s first TV performance of “Mic Drop,” which was released last week in a remix by American DJ Steve Aoki and featuring rapper Desiigner.

Member Min Yoon-gi, also known as Suga, thanked his American fans by saying, “Korea and English, we have different languages but I think we all think similarly. We’re grateful that many (American) fans have identify themselves with our lyrics.”

Leader RM, whose real name is Kim Nam-joon, shared how he learned English by watching DVDs of American TV show “Friends” bought by his parents. “When I was 15 it was quite like a syndrome of all the Korean parents to make their kids watch ‘Friends,’” said RM.

When asked by host Ellen DeGeneres about whether the seven members have ever dated anyone within their global fan community, known as ARMY, member V answered, “Not, no,” causing raucous laughter from the studio audience, of whom many were loyal fans.

The K-pop sensation performed its hit single “DNA” at the 45th American Music Awards, which were held at Microsoft Theater in Los Angeles and broadcast live by U.S. broadcaster ABC earlier this month. The band has also filmed segments for “The Late Late Show With James Corden” and “Jimmy Kimmel Live!” to be aired at later dates.