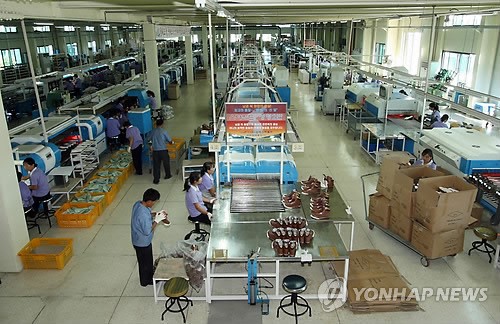 The South Korean firms doing business in the Kaesong Industrial Complex posted an annual operating growth of 11.75 percent from 2005 to 2013, according to the data compiled by an association for South Korean firms in the industrial complex. (image: Yonhap)

SEOUL, Jan. 19 (Korea Bizwire) — The overall earnings of ten South Korean companies that are operating in a jointly-run inter-Korean industrial complex have increased by an average of over 10 percent per year since 2005, data showed Monday, indicating that they have been doing relatively well despite political tensions that have emerged over the years.

The South Korean firms doing business in the Kaesong Industrial Complex, a manufacturing zone jointly run by the two Koreas in a North Korean border city, posted an annual operating growth of 11.75 percent from 2005 to 2013, according to the data compiled by an association for South Korean firms in the industrial complex.

The complex, which first opened its doors to South Korean companies in late 2004, has served as a major revenue source for the cash-strapped communist country, as the firms employ North Korean workers.

The complex has had its share of difficulties whenever inter-Korean relations turned particularly sour, including a five-month business halt in 2013, but the latest figures show that their involvement in the industrial zone has been conducive to their earnings on cheap labor and other production costs.

Romanson Co., for example, saw that its net profit have risen by double-digit figures on average annually for eight years since its business in Kaesong began in 2005. Share prices of the watchmaker, listed on the local tech-laden KOSDAQ market, have also jumped nearly 620 times over the cited period.

Local stock funds with exposure to such companies operating in the inter-Korean complex have been enjoying strong returns as well. “Hi Korea Unification Renaissance Stock Fund,” launched by local asset manager Hi Asset Management Co., delivered a return of 9.79 percent during the eight-month period since its introduction in mid-May.

“The low cost of labor in Kaesong has been a considerable advantage for the companies’ competitiveness,” an official at Hi Asset Management said. “It’s evident that the firms operating there have been logging higher earnings, and you can also see that in the share prices.”