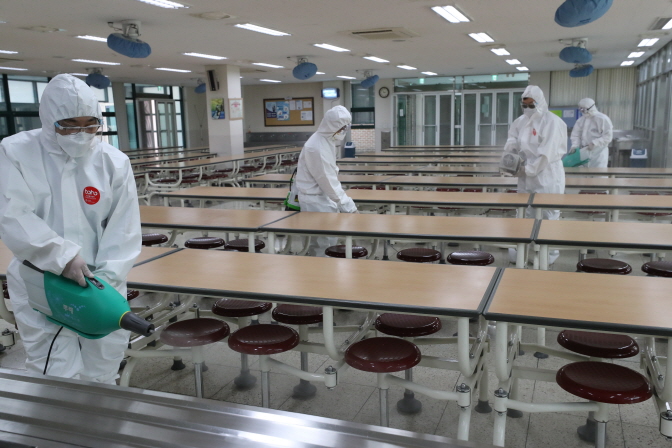 Health authorities disinfect a high school cafeteria in the southeastern Seoul ward of Songpa on May 6, 2020. (Yonhap)

SEOUL, June 3 (Korea Bizwire) — The Korea Centers for Disease Control and Prevention (KCDC) will be promoted to an independent administrative organization, as the government seeks ways to ensure a better state response to a public health crisis like the COVID-19 pandemic.

A new KCDC will have independent power over budget and personnel matters, which will, among other things, allow it to carry out research and hire experts, the Ministry of the Interior and Safety said Wednesday while announcing its plan to seek a revised bill on organizing government offices.

Under the revision, the KCDC will be separated from the Ministry of Health and Welfare, and be operating disease response centers in major provinces under its wing.

The new government agency will also be entitled to set up and execute disease control policies.

The welfare ministry will come to have two vice ministers — from currently one — who will each oversee welfare and public health affairs.

The move comes at a time when a swift, systematic and professional response to a public health crisis has become ever more crucial to protect people’s lives.

Last month, President Moon Jae-in stressed the importance of strengthening the agency’s expertise and independence amid the prolonged health crisis.