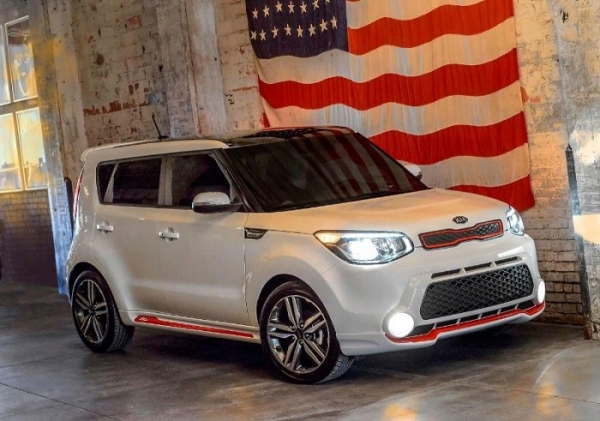 The “Red Zone” edition Soul is the first special-edition based on the all-new second-generation Soul. (Photo : Kia Motors America)

IRVINE, Calif., Dec. 6, 2013 (Korea Bizwire) – Kia Motors America (KMA) announces its first special edition Soul of 2014 with the “Red Zone” edition.  Inspired by the ultra-popular Track’ster concept previously unveiled at the 2012 Chicago Auto Show, the “Red Zone” edition Soul is the first special-edition based on the all-new second-generation Soul and is scheduled to go on sale during the first quarter of 2014.

“The Soul has always appealed to those who choose to express their individuality through their vehicle, and special editions have been a part of the lineup since the first-generation Soul went on sale in 2009,” said Michael Sprague, executive vice president, marketing & communications, KMA.  “The Red Zone Soul underscores that independent spirit and brings to life many styling features from our wild Track’ster concept.”

Based on the 2014 Soul Plus, the “Red Zone” Soul exudes its own extroverted personality with White exterior paint and an aggressively styled body kit featuring red accents throughout, including treatment on the front grille, front and rear fascias, and side skirts.  Custom 18-inch alloy wheels fill the wheel wells and keep the “Red Zone” Soul firmly planted on the tarmac.  Power comes from Kia’s efficient 2.0-liter gasoline direct injected (GDI) four-cylinder engine which puts 164 horsepower to the ground via a six-speed automatic transmission.

As with all previous special-edition Souls, the “Red Zone” will be offered in limited quantities. Just 2,000 examples will be available.

About the 2014 Soul Instantly recognizable yet thoroughly fresh – with more than a passing nod to the hot Track’ster concept that was unveiled last year – the all-new 2014 Soul rides on a new chassis that is stiffer, longer and wider.  The Soul’s new dimensions allow for more passenger and cargo room while NVH levels have been reduced dramatically. Increased torque and significant suspension upgrades make the 2014 Soul a nimble and agile companion in congested urban environments and inside there is a long list of standard comfort and convenience features, including Bluetooth®[1] wireless technology and steering wheel-mounted controls.

Kia:  One of the World’s Fastest Moving Global Automotive Brands Kia Motors America is one of only three auto brands to increase U.S. sales in each of the past four years, and in 2012 the company surpassed the 500,000 unit mark for the first time.  With a full line of fun-to-drive cars and CUVs, Kia is advancing value to new levels of sophistication by combining European-influenced styling – under the guidance of chief design officer Peter Schreyer – with cutting-edge technologies, premium amenities, affordable pricing and one of the lowest costs of ownership in the industry.  Kia recently moved up in the exclusive ranking of Interbrand’s “Top 100 Best Global Brands” after joining the list for the first time last year, and is poised to continue its momentum with seven all-new or significantly redesigned vehicles scheduled to arrive in showrooms in 2013.  Over the past decade Kia Motors has invested more than $1.4 billion in the U.S., including the company’s first U.S. assembly plant in West Point, Georgia – Kia Motors Manufacturing Georgia – which is responsible for the creation of more than 14,000 plant and supplier jobs.  The success of the U.S.-built* Optima and Sorento in two of the industry’s largest segments has fueled Kia’s rapid growth and is complemented by Kia’s comprehensive lineup which includes the Cadenza flagship sedan, Soul urban passenger vehicle, Sportage compact CUV, Optima Hybrid, the Forte sedan, Forte5, and Forte Koup compacts, Rio and Rio 5-door sub-compacts and the Sedona minivan.

Information about Kia Motors America and its full vehicle line-up is available at its website – www.kia.com. For media information, including photography, visit www.kiamedia.com. To receive custom email notifications for press releases the moment they are published, subscribe at http://www.kiamedia.com/us/en/newsalert.