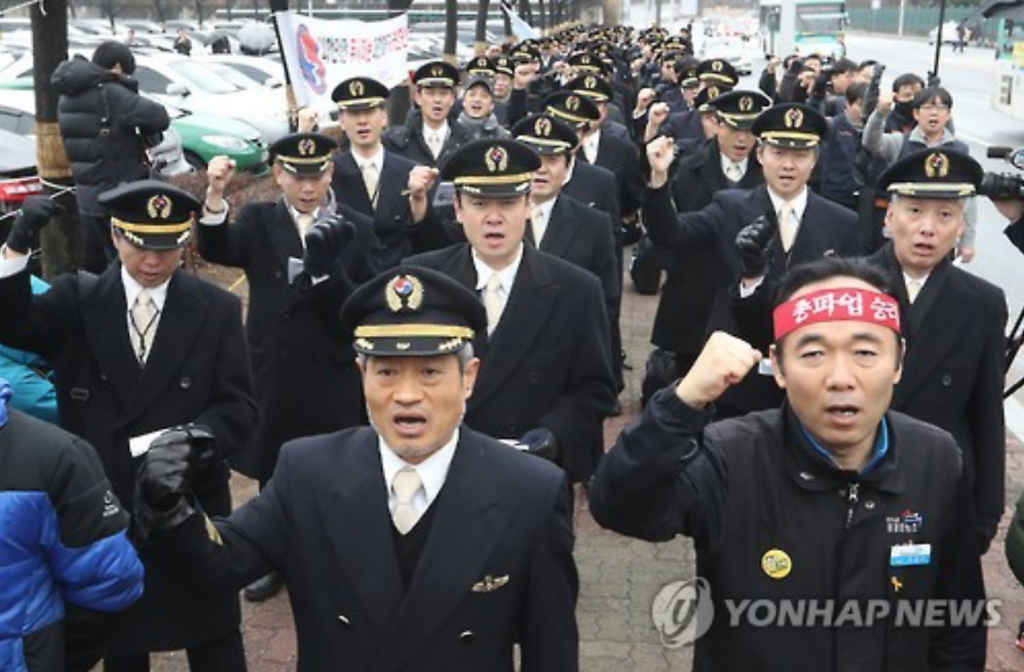 Unionized pilots of Korean Air mark the start of their 10-day walkout in a rally held in front of company headquarters in Seoul on Dec. 22, 2016. (image: Yonhap)

Some 190 pilots out of the total 2,300 at Korean Air took part in the second day of the strike scheduled to end Dec. 31.

Under a 2010 revision to the aviation law, up to 20 percent, or some 460, of the unionized pilots could have taken part in the strike. However, the union said it decided to minimize the number out of concerns that a greater number taking part could cause great inconvenience for passengers or undermine the overall safety of flights as those who continue working would be forced to work overtime.

The union has said the strike itself, at least partly, sought to help improve the safety of Korean Air flights.

The first walkout by Korean Air pilots in 11 years came after year-long negotiations over a wage increase failed.

The company continues to insist on a 1.9-percent raise, while the pilots demand a 29-percent hike, down from their initial demand of 34 percent.

The pilots insist such a high increase was necessary to end what they called a steady departure of experienced pilots to foreign airlines, especially those in China, which are said to pay up to three times higher than their South Korean competitors, including Korean Air.

They said job positions left by experienced pilots have been filled with young, inexperienced aviators, which in turn has led to an apparent drop in the overall safety of Korean Air flights.

“The requested increase rate is a rather symbolic figure that represents our demand to bring the working conditions of Korean Air pilots to those of international standards,” the union has said.

“We have repeatedly expressed our intention to call off the strike should the management offer even 1,000 won (US$0.84) more than their initial offer, but our request has ultimately been rejected.”

“We greatly regret the fact that the pilot union has decided to go on strike, completely ignoring the inconvenience it will cause our passengers. But we will work to bring this to an end at the earliest date possible through continued discussions with the pilot union,” Korean Air said in a press release.