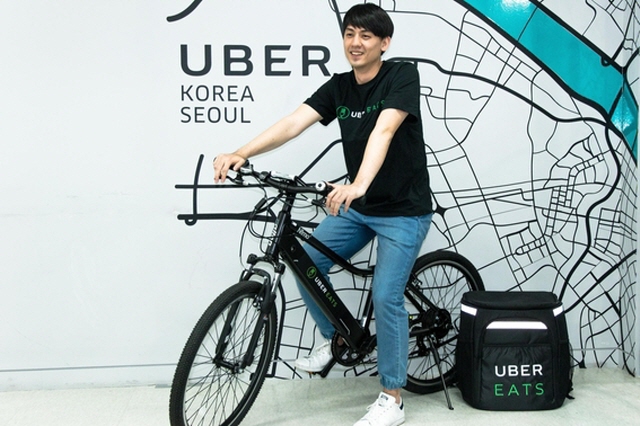 A model poses on an electric bicycle made by Alton Sports at an event held in Seoul where Uber Korea partnered with the local bicycle manufacturer. (image: Uber Korea)

SEOUL, Jul. 28 (Korea Bizwire) — U.S. ride-hailing company Uber Technologies Inc. is seeking a breakthrough in their South Korean business operation by launching the restaurant delivery app UberEATS by the end of the year.

The move comes as the San Francisco-based company moves to expand its presence in the Korean market after its car-sharing service UberX was declared illegal in 2013 following stiff resistance from local taxi drivers and the Seoul City government.

While looking for an opportunity to resume the UberX business in Asia’s fourth-largest economy, Uber is speeding up its preparations to breach the country’s delivery service market.

“I am incredibly excited about bringing UberEATS to Korea. This is a significant investment, and UberEATS is committed to Korea in helping to provide a new option for eaters, restaurants and delivery partners – with the push of a button – in one of the most vibrant food cultures in the world,” Allen Penn, Asia Pacific’s head of UberEATS, said in April.

This year, Uber Korea has signed partnerships with premium restaurants and delivery partners.

In June, the company joined forces with Alton Sports to provide discounts for delivery partners purchasing an electric bicycle made by the local bicycle manufacturer for work. This week, it formed business ties with the country’s biggest retail lender KB Financial Group as it moves to set up the financial infrastructure for UberEATS operations.

Anyone can sign up to become a delivery partner with UberEATS. They can deliver using the transportation of their choice such as bicycles, motorcycles and cars. They decide their working hours and receive different charges for every delivery depending on the distance traveled.

Seoul is a heavily populated city with a population of 10 million. Eight out of 10 South Koreans use smartphones and they increasingly order popular food items through mobile apps.

UberEATS is expected to heat up competition in the country’s 12 trillion won (about $11 billion) food delivery app market already dominated by established homegrown apps such as YoGiYo and Baedal Minjok.

The premium food delivery service began in Toronto in 2015 and is now available in 100 cities in 27 countries around the world.

“What differentiates UberEATS from other food delivery apps is customers can enjoy food delivered from famous restaurants and lesser-known but gourmet restaurants to the places they want,” a Seoul-based Uber spokeswoman said. 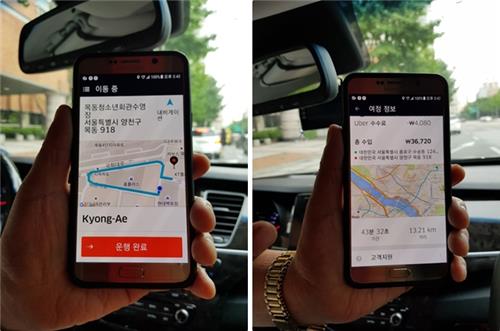 UberEATS does not mean the U.S. ride-sharing service giant has given up its ride-hailing services in South Korea.

It made a comeback with its premium taxi service, UberBLACK, last year mainly to serve customers in the downtown, Itaewon and affluent Gangnam areas. But the small number of 52 UberBLACK vehicle drivers and higher fares compared to regular cabs are likely to remain major hurdles for the U.S. company.

Currently in Seoul, the UberBLACK cars compete with a combined 296 premium taxi drivers from Kakao Black, Nimo Black and Samwha Taxi. They, all licensed drivers, are registered with Seoul City Government for taxi services, Park Byeong-seong in charge of Seoul City’s Taxi and Logistics Division, said over the phone.

Citing a recent survey, the official said about 600 premium taxies are needed to meet demand for such services in Seoul.

Still, high usage fees and lack of recognition about the matching of passengers and drivers through an app remain obstacles for wide spread use of the services, Park said.

Moreover, many Koreans still think Uber taxi services are illegal and such a negative view about the service keeps it from moving forward. UberX services were banned in Seoul as it violated local transportation laws by partnering with non-licensed independent drivers.

“Uber will be able to resume its UberX service in Seoul only when the country’s transportation laws undergo changes to allow independent drivers, who are not professionally licensed and do not have appropriate insurance, are allowed to serve passengers for a fee,” he said.

Uber, valued at $70 billion, has about 2 million driver partners in 600 cities around the world.

Lee Hee-nam, a 64-year-old UberBLACK driver, stressed the role of Seoul City in promoting premium ride-hailing services in the capital city “with lots of tourism sites frequented by foreigners.”

“Foreigners are familiar with the Uber app so they prefer to call an Uber taxi in Seoul. Eighty percent of my customers are tourists from Europe, Southeast Asia and the Middle East,” Lee told Yonhap News Agency.