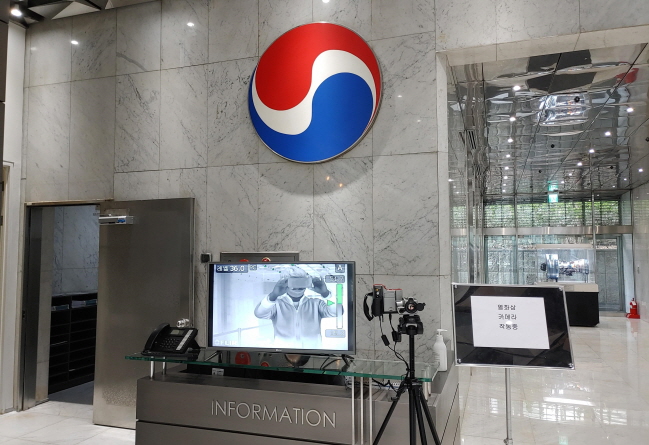 A thermal imaging camera set up in the lobby of Korean Air’s office building in central Seoul. (image: Korean Air)

SEOUL, Feb. 28 (Korea Bizwire) — Korean Air Lines Co., the country’s biggest airline by sales, said Friday it will reduce flights on U.S. routes next month and use smaller planes due to declining demand amid the spread of the new coronavirus.

Korean Air will temporarily reduce the number of flights on the routes from Incheon to San Francisco, Honolulu and Boston from March 7-28 to minimize the impact of COVID-19 on its business, the company said in a statement.

“We may reorganize further flight schedules depending on coronavirus developments and its impact on the airline business,” a company spokeswoman said over the phone.

The flight cuts to the United States are adding to woes at the company, which has already suspended some of its flights on Chinese and Southeast Asian routes since early this month.

Starting with U.S.-bound flights Saturday, the company plans to check all passengers on domestic and international routes to see if they have fevers while conducting deep cleanings and disinfections.

The national flag carrier said Tuesday it will extend flight suspensions to China by one month through April 25. It offered 204 flights a week on 30 routes to China before the new coronavirus hit.

The numbers fell to 57 flights on 10 routes and look set to drop further unless the virus is contained.

On Tuesday, one of its flight attendants was diagnosed with the potentially deadly respiratory illness after serving on international routes.

Asiana Airlines Inc., the country’s second-biggest carrier, said it will halt more flights on Asian routes until mid-April. Its flights to China fell to 53 on 14 routes from 204 on 26 routes.

In self-help measures to weather the fallout from the virus, Asiana asked all 10,500 employees to take turns going on 10 days of unpaid leave starting Feb. 19 so the company can cut costs and avoid snowballing losses.

The company, whose net losses widened to 837.79 billion won in 2019 from 195.86 billion won a year ago, also plans to cut the wages of executives and managers by up to 40 percent on a monthly basis until the virus outbreak slows down. 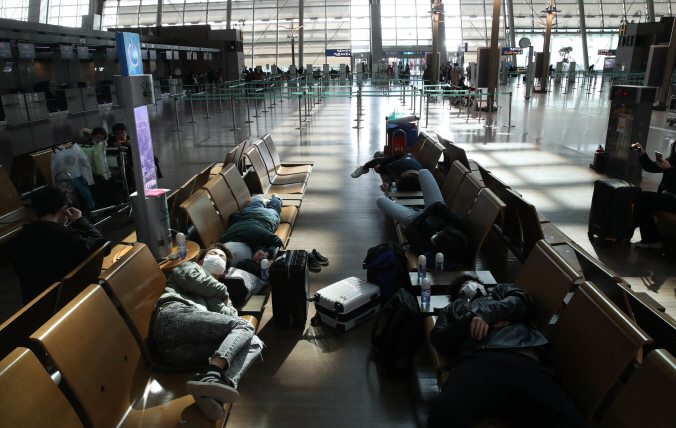 This photo taken on Feb. 26, 2020, shows Incheon International Airport with foreign tourists in masks resting on seats amid the spreading coronavirus outbreak. (Yonhap)

Low-cost carriers are taking similar steps to deal with the virus outbreak.

Out of its 17 routes to mainland China, Jeju Air currently only operates the Incheon-Weihai route. Its flights to Hong Kong, Macao and Taiwan are not in service.

All executives at Air Seoul returned a portion of their salaries — as much as 30 percent — this month and won’t accept salaries in March.

Its employees will take paid leave for the whole of next month and receive salaries worth 70 percent of their regular wages.

Jin Air, a low-cost carrier unit of Korean Air Lines Co., and Air Busan have suspended all of their flights to China until the end of March. Jin Air asked its cabin crew members to take one-month paid leave at salaries worth 70 percent of regular pay from March to May.

Eastar Jet paid 40 percent of its normal salaries to executives and employees this month.

With a growing number of multinational airlines suspending their flights to South Korea amid virus fears, analysts said local airlines will be forced to suspend more flights and their stock prices will likely suffer further losses.

On Friday, most airline stocks plunged in line with the broader KOSPI’s 3.3 percent loss.