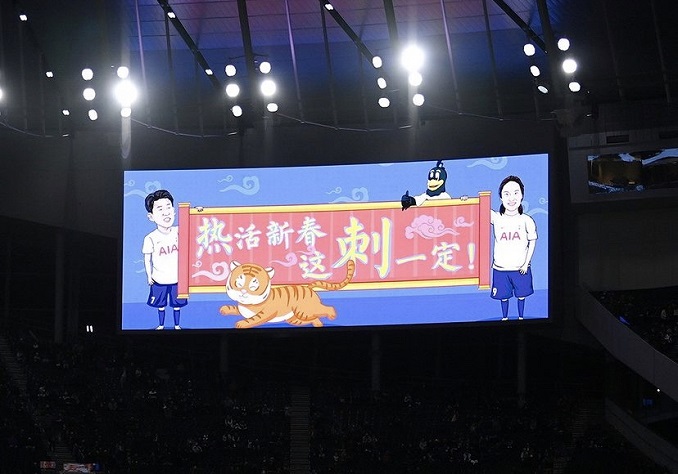 This photo capture from the Instagram of Tottenham Hotspur Stadium shows caricatures of Son Heung-min (L) and Chinese Tottenham Hotspur Women forward Tang Jiali with the club’s a message of congratulations for Chinese New Year’s Day.

The Premier League club showed caricatures of the South Korean star forward and Chinese Tottenham Hotspur Women forward Tang Jiali on a stadium screen on Sunday along with a message of congratulations for the Lunar New Year’s Day, also referred to as “the Spring Festival” in China.

“Son Heung-min has no relation to the Chinese New Year. Showing his face on the Chinese New Year shows Tottenham’s failure to recognize the cultural differences between South Korea and China,” the Voluntary Agency Network of Korea (VANK), which promotes the country and its history online for an international audience, said in a social media post on Tuesday.

“We demand an apology for the football club’s ignorance.”

“Chinese netizens, companies and even the government have recently been engaging in acts to ‘rob’ Korea of its identity. Tottenham’s recent act only adds to the effect,” the civic group added.

VANK produced and distributed posters in protest of the football club, and posted a global petition.

The civic group made a poster with a slogan designed after the football club’s stadium logo, calling upon the team to “apologize for being ignorant.”

In the petition, the agency demanded that the football club “officially recognize its failure to discern cultural differences between South Korea and China, take down the controversial post, and apologize to Korean fans.”