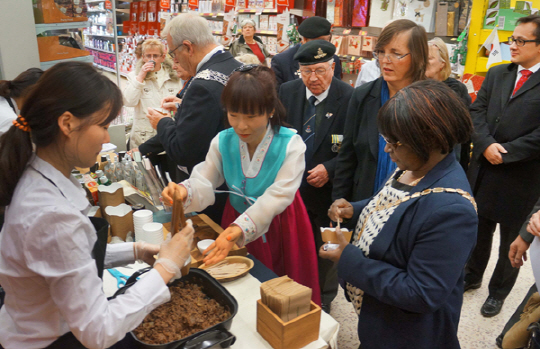 At ten stores, special events are being held to provide customers who are not familiar with the food with a chance to taste K-foods such as bibimbap, bulgogi and kimchi. (image: Homplus)

SEOUL, Nov. 22 (Korea Bizwire) – Londoners will now have the chance to taste Korean foods such as ramyun (also known as  ramen in Japanese), kimchi, bulgogi and Korean alcohol soju at Tesco stores by December 2.

The 4th Korean Food Exhibitions are being held at 62 Tesco stores in Britain until December 2nd,  and are jointly hosted by the Korea Trade-Investment Promotion Corporation and domestic retailer Homeplus.

At the short-term exhibitions, a total of 70 types of Korean foods and ingredients are waiting for London gourmets. They include Korean culinary staples such as sauce for Korean barbecued beef bulgogi, red-pepper paste called gochujang, chili powder dubbed gochugaru, Korean rice, dried seaweed, ramyun and soju, manufactured by 18 South Korean food companies such as CJ Cheiljedang, Ottogi, Lotte and Daesang.

At ten stores, including New Malden Extra Store and Surrey Quays Extra Store, special events are being held to provide customers who are not familiar with the food with a chance to taste K-foods such as bibimbap, bulgogi and kimchi.

The exhibition has been a stepping stone for Korean foods, which have long been sold at small Korean grocers and local supermarkets, to enter the London food market.. Korean food products were sold at Tesco stores for the first time in 2012. The number of in-store shops at Tesco increased to 113 this year from 12 in 2012, up by about 10 times only in two years. Sales volume of the food from this January through October reached about £540,000, or about 870 million won, for a 200 percent increase compared with the same period a year ago.