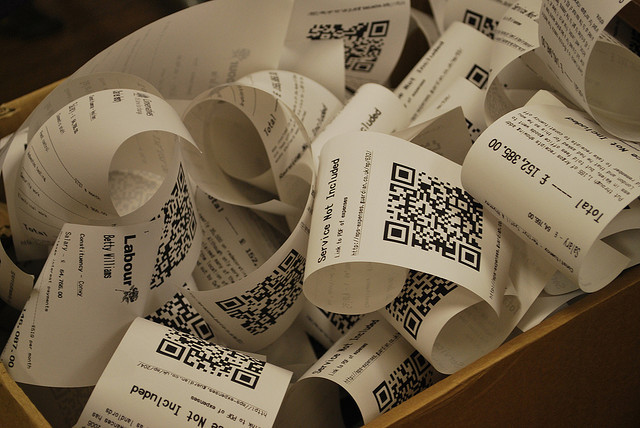 “Bisphenol A can reduce sperm count and can cause obesity,” said a KWEN official. “Bisphenol S, which has lately been replacing bisphenol A, is also known to be endocrine-disrupting.” (image: KobizMedia/ Korea Bizwire)

SEOUL, May 16 (Korea Bizwire) – The humidifier sterilizer controversy is extending further to typical retail printed receipts, with consumer anxiety on the rise.

Several environmental organizations are claiming that bisphenol-related substances used in making receipts can be health-damaging. But related businesses are rejecting the claim, insisting that there is no proven relationship. Authorities are also looking into the matter, but are siding with the businesses for now.

The Korean Women’s Environmental Network (KWEN), No Cancer Society, and Citizen’s Movement for Environmental Justice (CMEJ) stated on May 15 that they detected bisphenol A and bisphenol S in printed receipts from major retailers. Bisphenols A and S are supposed endocrine-disrupting substances.

The three organizations collected and analyzed printed receipts from six major markets and department stores, and discovered 0.7 to 1.2 percent bisphenol A or S in receipts from Shinsegae and Hyundai Department Stores, Homeplus, and Emart. None were found in the receipts from Lotte Mart and Lotte Department Store, which banned the use of bisphenol-related substances back in 2014.

Bisphenol is used in thermal paper, which is widely used for receipts and queue tickets. Thermal paper is coated with a chemical that changes color when exposed to heat.

“Bisphenol A can reduce sperm count and can cause obesity,” said a KWEN official. “Bisphenol S, which has lately been replacing bisphenol A, is also known to be endocrine-disrupting.”

The KWEN also added that such harmful substances can be absorbed through the skin and can even contaminate banknotes when kept together inside a wallet.

“Although there are claims that bisphenol is safe, there are opposing research results. There should be no room for controversy,” said a CMEJ official.

But the retail industry and government authorities are making different claims.

In response to the past controversy surrounding bisphenol A and its harmful effects, many businesses replaced the substance with bisphenol S.

“We switched from bisphenol A to S when there was a controversy surrounding bisphenol A, back in 2011. There are no legal or scientific implications to its toxicity,” said an Emart official. “We believe bisphenol S is the best option available thus far. It is used in many developed countries like the US.”

“We are still in the middle of investigating bisphenol A and its potential health dangers, but we know that the EU declared it non-harmful last year,” said a Ministry of Environment official. “We believe that it’s not at a level of serious concern, as long as it’s not directly consumed in any way.”

The environmental organizations, however, are standing firm. They claim that the EU never declared the substance safe, and that it is prohibiting the use of bisphenol in a variety of products.