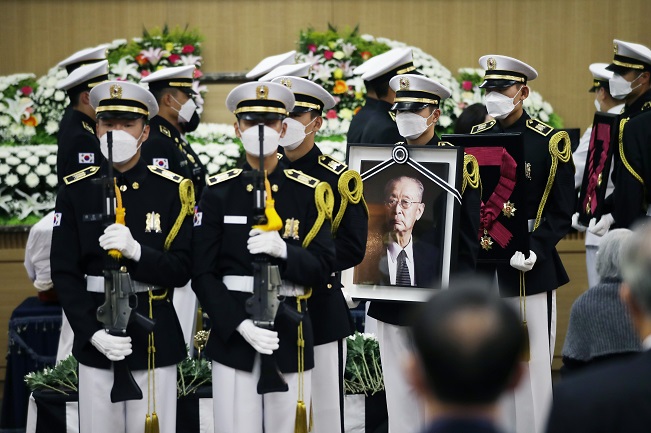 The funeral for Paik Sun-yup, South Korea’s best-known Korean War hero, is under way at Asan Medical Center in eastern Seoul on July 15, 2020. Paik died on July 10 at age 99. (Yonhap)

SEOUL/DAEJEON, July 15 (Korea Bizwire) — South Korea held a funeral service Wednesday for Paik Sun-yup, a legendary Korean War hero credited with saving the country from falling under the control of North Korea, with the Army chief vowing to firmly defend the country that Paik saved with “blood, sweat and tears.”

U.S. Forces Korea commander Gen. Robert Abrams also attended the funeral service held at Asan Medical Center in eastern Seoul, lauding Paik as “a patriot, a soldier’s soldier and one of the founding fathers of our ironclad alliance” between the two countries.

Also in attendance were Defense Minister Jeong Kyeong-doo, Joint Chiefs of Staff Chairman Park Han-ki and politicians from the ruling and opposition parties.

The funeral, presided over by Army Chief of Staff Gen. Suh Wook, was held on a small scale due to coronavirus concerns.

“We will do our best to firmly defend the Republic of Korea that the general, together with comrades, defended with blood, sweat and tears.”

He is credited with leading key battles during the 1950-53 war, including the battle of Dabudong, or Tabudong, in which his unit successfully stopped invading North Korean troops from moving further south in the southeastern region of Dabudong until U.S.-led U.N. forces arrived in the early months of the war.

That battle prevented the North from taking over the entire Korean Peninsula at the last minute and provided South Korean and U.N. forces with a chance to push back.

The war ended in a truce, not a peace treaty, leaving the peninsula still technically at war. 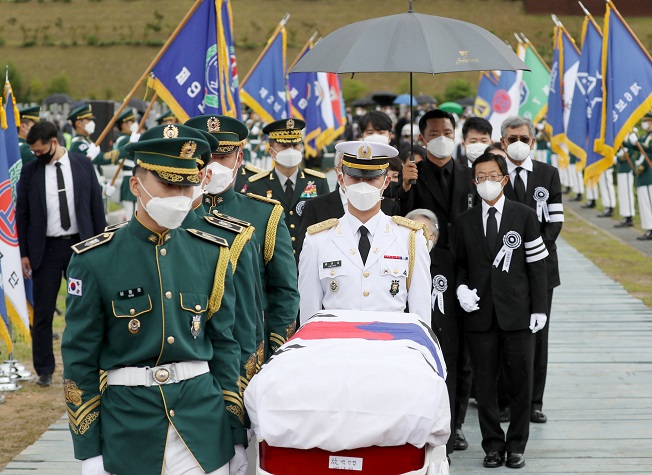 An honor guard carries the coffin of late Korean War hero Paik Sun-yup at the National Cemetery in the central city of Daejeon for his burial on July 15, 2020. (Yonhap)

Clad in a combat uniform similar to one he wore during the war, Paik’s body was buried at the National Cemetery in the central city of Daejeon.

Soils collected from eight former Korean War battlefields were scattered over the coffin during the burial ceremony that was also attended by U.S. Ambassador to South Korea Harry Harris, Abrams and former military leaders.

Near the cemetery, civic groups for and against his burial at the site held rallies. Police dispatched hundreds of officers to prevent clashes.

Supporters of Paik blasted the government’s decision to bury him at the Daejeon cemetery, arguing that he should be buried at Seoul National Cemetery, where former presidents, war heroes and other top patriots are laid to rest.

Opponents say Paik doesn’t deserve burial at any national cemetery, let alone the Seoul cemetery, citing records he served in a pro-Japanese military force and cracked down on Korean guerilla forces fighting for independence from Japan.