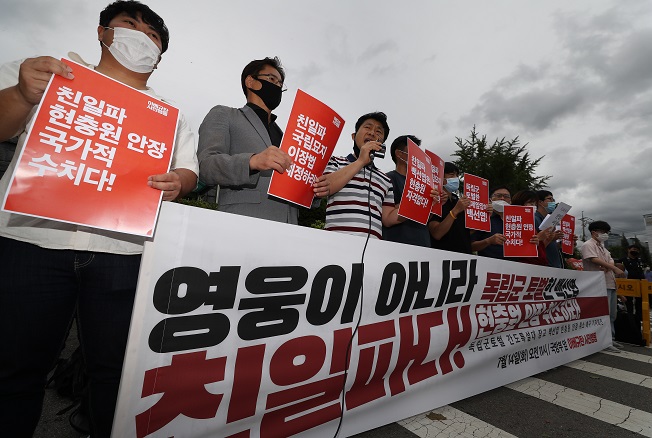 The Civil Movement for Condemnation of Abe held a press conference on July 14, 2020 in front of the building of the Ministry of Defense in Seoul. (Yonhap)

SEOUL, July 15 (Korea Bizwire) — Civil groups spoke in different voices over Paik Sun-yup, South Korea’s first four-star general and a hero of the Korean War who passed away on Friday at age 99.

He is credited for bravely leading key battles during the 1950-53 war and contributing greatly to the modernization of South Korea’s armed forces.

Paik, however, was the subject of controversy over his service at the pro-Japan Gando Special Force under the Japanese Imperial Army between 1943 and 1945.

The Civil Movement for Condemnation of Abe, a gathering of left-wing civil groups to condemn Japanese Prime Minister Shinzo Abe, held a press conference on Tuesday in front of the building of the Ministry of Defense in Seoul.

They called for the government to cancel the decision to bury Paik in the National Cemetery, claiming that he served as a pro-Japan, anti-Korean activist who subjugated the Korean independence militia fighters during Japan’s colonial rule of the Korean peninsula.

“Paik admitted himself that he served for Japan’s Gando Special Forces which were established to suppress the Korean independence militia fighters during Japan’s colonization of the Korean peninsula,” the groups said.

“The Presidential Committee for the Inspection of Collaboration for Japanese Imperialism already clarified him as a pro-Japan, anti-Korean traitor in 2009.”

In contrast, the Freedom Korea National Defense Corps, a right-wing civil group, held a rally on the same day to protest against Kim Won-woong, chairman of the Korea Liberation Association who spoke ill of Paik.

During the rally, it claimed that Paik was not a traitor but a benefactor who saved the life of Korea, calling for the chairman of the Korea Liberation Association to step down.

“In 1943 and 1944 when Paik served in the Gando Special Forces, there were no Korean independent militia fighters in Manchuria,” said Kim Byung-heon, head of the Research Institute for Korean History Textbooks.

“Kim Won-woong, chairman of the Korea Liberation Association, is dividing the nation by making the false claim that Paik is a pro-Japan activist.”