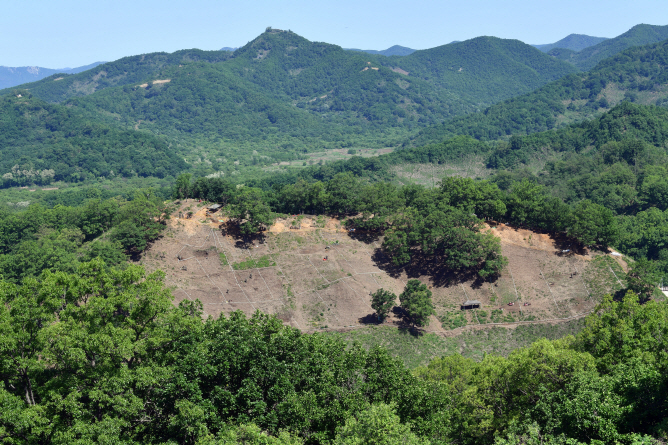 Arrowhead Ridge inside the DMZ in Cheorwon, Gangwon Province. (Yonhap)

SEOUL, Sept. 17 (Korea Bizwire) — While the utility and value of the Demilitarized Zone (DMZ) that separates North and South Korea are being re-examined, there is a difference in the perception of Koreans and foreigners looking at the iconic divide.

According to a survey of 800 people, including 500 South Koreans, 150 Chinese and 150 Germans by the Gyeonggi Research Institute, ‘North Korea’ was the highest with 7.1 percent as an image emerging from the DMZ.

On the other hand, if only the South Korean results were tabulated, respondents cited ‘North Korea’ at 8.6 percent, ‘the South-North division’ at 8.4 percent, and ‘land mines’ at 8.4 percent.

Chinese chose ‘peace’ at 12 percent and German answered ‘I don’t know’ at 10.7 percent.

When asked about the valuable factors of the DMZ, including ecological and cultural resources, the respondents cited the ‘symbol of division’ the most.

Koreans cited ‘ecological resources’ as a far higher factor, but Germans rated ‘symbol of division’ and Chinese ‘symbol of war’ the most.

Some 75.8 percent of German respondents who had visited Korea visited the DMZ, which is quite high compared to the 50.4 percent of Chinese visitors, according to the survey.

“South Koreans felt that the DMZ’s ecological value was highly valued and prioritized natural protection,” said Lee Jung-hoon, the senior researcher at the Gyeonggi Institute who conducted the study.