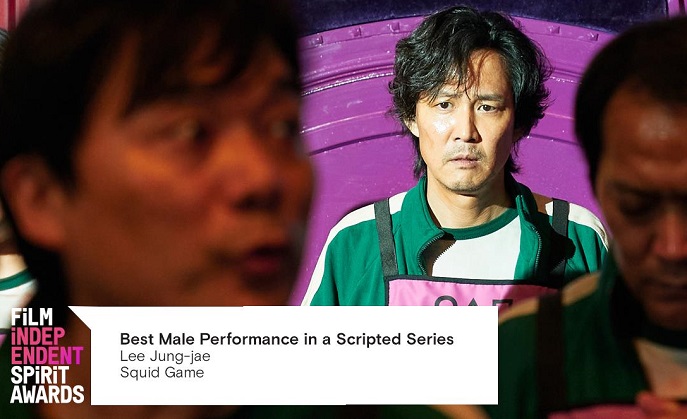 This image from the Twitter account of the Film Independent Spirit Awards highlights Lee Jung-jae of “Squid Game” winning Best Male Performance in a Scripted Series on March 6, 2022.

At the awards ceremony in Santa Monica, California, held Sunday (U.S. time), Lee was awarded Best Male Performance in a Scripted Series, beating Olly Alexander of “It’s a Sin,” Michael Greyeyes of “Rutherford Falls,” Murray Bartlett of “The White Lotus” and Ashley Thomas of “THEM: Covenant.”

“Thank you for giving me this meaningful award,” Lee said in a videotaped acceptance speech. “First of all, I’d like to thank the ‘Squid Game’ team and Netflix, and to thank all the audience who loves ‘Squid Game.’”

He hinted that he is working on the second season of Netflix’s most successful series.

“I know there are lots of ‘Squid Game’ fans in the world, and what you’re all curious about the most is when Season 2 will come out,” he said. “It’s on the way. Stay tuned!”

And he is the second winner of best actor in a TV series at the Indie Spirit Awards, dedicated to independent filmmakers, which expanded categories for television series last year.

Also, Lee became the second Korean actor to win a prize at the annual awards after Youn Yuh-jung who won best supporting actress last year for her performance in the immigration film “Minari.”

Lee took the role of Gi-hoon, a down-on-his-luck middle-aged man drawn to a mysterious competition of traditional Korean kids’ games that will reward the only survivor with 45.6 billion won (US$37.8 million) in prize money.

The all Korean-language Netflix original series “Squid Game” has been rallying in the U.S. awards season.