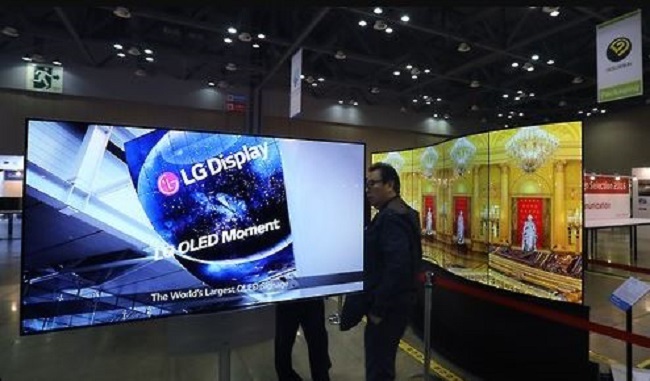 The tie-up can improve the audio experience of LG TV users and is in line with the steps to tap deeper into the premium market.

Ahead of the opening of the Internationale Funkausstellung (IFA), which kicks off in Berlin on Sept. 1 for a six-day run, LG Electronics held a showcase event for its OLED TVs boasting high-end audio features.

“B&O has chosen LG OLED TVs that suit its reputation as a premium audio company,” LG Electronics said. The company pointed out that its TVs are acknowledged as top premium products sporting the finest resolution screen with excellent contrast and ultra-slim design.

The South Korean tech giant said the competition in the OLED TV segment has been escalating, with the number of OLED-TV producers participating in the IFA increasing to 13 from last year’s eight.

“More companies are joining the OLED TV industry to secure stable profits,” LG Electronics said. “As the liquid crystal display (LCD) technology has reached its peak, companies can no longer distinguish themselves from others only with LCD products.”

“Taking such factors into consideration, they are tapping the market with differentiated premium OLED TV products,” it added.

LG Electronics highlighted that the company has been able to make the smooth transition into the OLED sector.

The company’s home entertainment business, which covers TVs, posted an operating profit ratio of 8.5 percent in the January-June period, with OLED TVs taking up 15 percent of its sales. LG said the figures are significant as OLED TVs only account for 3 percent of its combined shipment units.

LG added this year’s IFA will be an important venue for the company to promote its latest products, as Europe takes up 40 percent of its OLED TV sales.

The consumer electronics giant said its products have been receiving favorable reviews from multiple countries, including Britain, Germany, France and Spain.