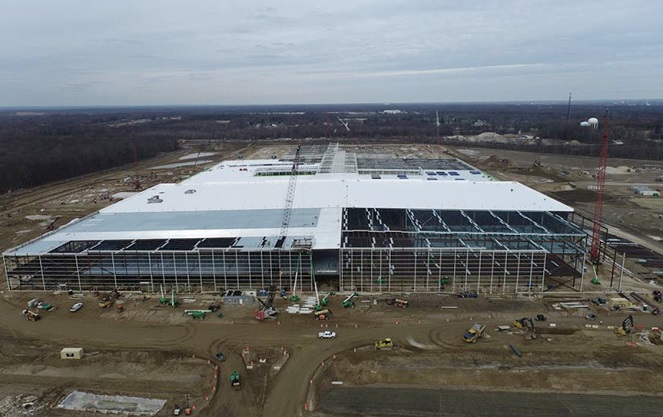 This file photo, provided by LG Energy Solution Ltd. on March 12, 2021, shows its battery plant under construction in Ohio, the United States, through the joint venture with General Motors Co.

LGES and GM are expected to chip in half of the amount each through their U.S.-based joint venture, Ultium Cells LLC, for what will be their third joint battery plant in America, a regulatory filing by LG Chem Ltd., LGES’ parent company, showed.

The investment will be made in installments through 2026, the filing read.

LGES declined to provide details, such as the location or size, until the formal announcement. The two companies are expected to hold an event soon to unveil the investment in detail.

It had been widely expected that Ultium Cells is looking at Michigan as the site for the third battery plant. LGES and GM are already building two other factories in Ohio and Tennessee with an aim to start operation as early as later this year.

LGES, the world’s No. 2 battery maker, said it plans to invest more than 5 trillion won (US$4.17 billion) by 2024 to expand its foothold in North America.

Tuesday’s filing came ahead of LGES’ planned listing on the country’s main KOSPI stock exchange, slated for later this week, in what will be the largest market debut by a company in South Korea.

The IPO will value LGES at 70.2 trillion won, making it the third-biggest listed company on the KOSPI, only after two South Korean tech bellwethers — Samsung Electronics Co. and SK hynix Inc.