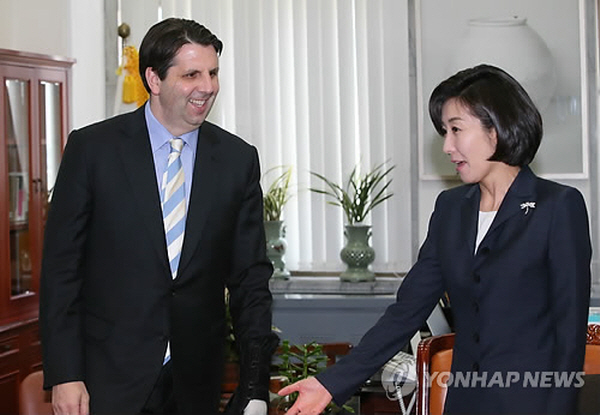 Mark Lippert, U.S. ambassador to South Korea, was quoted as saying by informed sources that he agreed with Rep. Na Kyung-won on South Korea’s concerns over the proposed speech by Abe at the U.S. Congress and that the United States fully understood those concerns. (image: Yonhap)

Mark Lippert, U.S. ambassador to South Korea, was quoted as saying by informed sources that he agreed with Rep. Na Kyung-won on South Korea’s concerns over the proposed speech by Abe at the U.S. Congress and that the United States fully understood those concerns.

Abe is scheduled to address a joint meeting of the U.S. Congress next Wednesday.

Concerns have grown in the United States as well as in South Korea as Abe is unlikely to issue a new apology for Japan’s wartime atrocities done to South Korea and other Asian neighbors amid Japan’s worsening ties with neighboring nations.

Lippert made the remarks while meeting with Na, head of the National Assembly’s foreign affairs committee, at her office here, said the sources well versed in the meeting.

In the 50-minute closed-door meeting, Na urged the United States to take greater interest in Japan’s denial of wartime atrocities, the sources said.

Abe has denied Japanese enslavement of hundreds of thousands of Asian women for sex at front-line brothels during World War II.

The Japanese premier insists Japan never forced millions of Koreans to work for Japanese companies during its occupation of the Korean Peninsula from 1910-45.

Former South Korean slave laborers, however, say they were mobilized for forced labor for dangerous tasks and were not properly fed.

Lippert has won the sympathy of South Koreans after being attacked by a knife-wielding South Korean man last month.

The 42-year-old is the youngest U.S. envoy to Seoul.

His wife gave birth to his son here, to whom was given the Korean middle name Sejun.