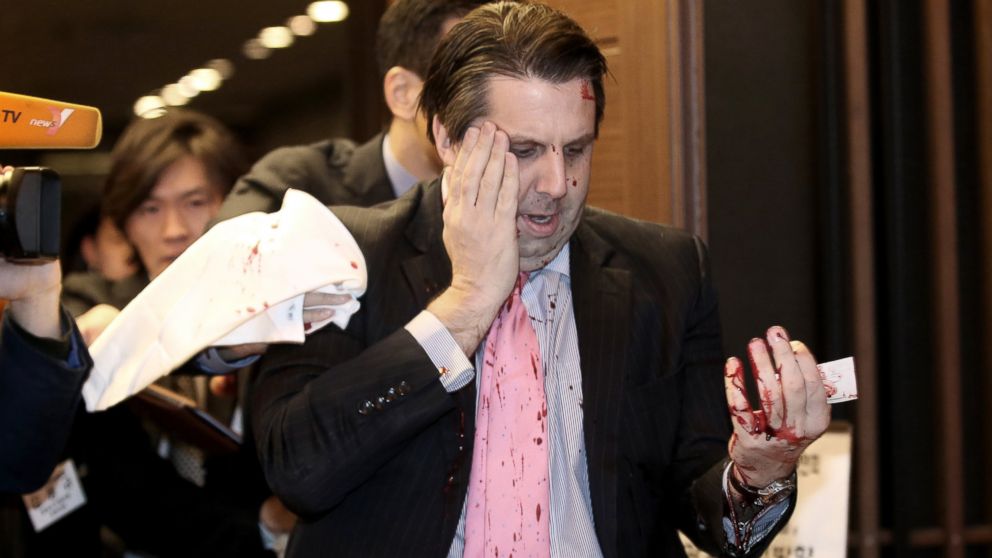 The U.S. Ambassador to South Korea Mark Lippert was attacked in Seoul today while giving a speech. (image: Yonhap)

SEOUL, Mar. 5 (Korea Bizwire) — U.S. Amb. to South Korea Mark Lippert was injured Thursday in an attack by a knife-wielding assailant who said he was against the ongoing military drills between the two countries, police said.

The male suspect, identified as 55-year-old Kim Ki-jong, cut Lippert’s face and wrist with a 25-centimeter paring knife around 7:40 a.m., as the envoy was preparing for a lecture at a venue in downtown Seoul, police said.

Lippert, bleeding, was rushed to a nearby hospital, police said, adding Kim was arrested immediately.

The ambassador was wounded on his right cheek and left wrist and sustained some cuts to his arm and fingers, authorities said. The U.S. State Department said the injuries weren’t life-threatening. Lippert was undergoing an operation at another hospital in western Seoul.

Witnesses said Kim, coming from behind, pushed Lippert onto the table and started assaulting him. The envoy was about to start his meal at the breakfast meeting preceding his speech, police said.

It is the first time a U.S. ambassador has been attacked in South Korea.

Lippert, 42, took office last year as the youngest-ever U.S. ambassador to Seoul. His wife gave birth to a son here in late January and the couple gave him a Korean middle name. He was formerly the assistant secretary of defense for Asian and Pacific security affairs from 2011 to 2012. He also served as the chief of staff to former U.S. defense secretary Chuck Hagel at the Pentagon.’

The suspect shouted his opposition to the annual Key Resolve and Foal Eagle military exercises that started Monday, police said. The exercises are part of Seoul and Washington’s efforts to better deter threats from North Korea.

Police said they were questioning the suspect to determine the exact motive for the attack. They said for now, the suspect did not appear to have ties with North Korea.

In July 2010, Kim received a suspended two-year prison term for throwing two pieces of concrete at a Japanese ambassador to Seoul. He published a book last year in which he details his assault on the Japanese envoy, Tosinori Shigeie.

Kim is the head of a liberal organization that protests Japan’s territorial claims over South Korea’s easternmost islets of Dokdo. He changed the address of his family register to Dokdo in 2006 after the Japanese prefecture of Shimane designated a day named after Takeshima, which is what the islets are called in Japan.

According to recent blog posts, Kim appears to have shifted his attention from the islets issue to the role the U.S. plays in inter-Korean relations.

On Tuesday, Kim wrote a post that condemned the military drills between South Korea and the U.S., calling it “the reason why the union between family members (separated by the 1950-53 Korean War) couldn’t take place.”

“If the two countries reduce the scale and period of the exercises, North Korea would respond accordingly,” he wrote.

The U.S. said it “strongly (condemns) this act of violence” in a statement by State Department deputy spokeswoman Marie Harf.

Curtis Scaparrotti, commander-in-chief of the South Korea-U.S. combined forces command, told reporters that the training will continue as scheduled.

Police said they will strengthen the security around U.S.-related facilities and personnel from now on to prevent similar attacks in a measure criticized as being too late.

The U.S. Embassy had not requested a safety escort for Lippert, authorities said.

The organizer of the event where Lippert was to give a speech apologized for the loose security and condemned the attack as “anti-humanitarian terrorism.”

“We send our deepest apologies to the governments of South Korea and the U.S.,” the Korea Council for Reconciliation and Cooperation said in a statement. “We wish for the speedy recovery of Mr. Lippert and send our deepest condolences to his family.”