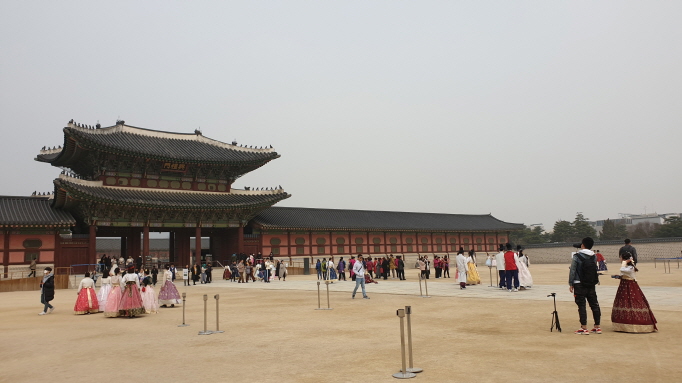 SEOUL, Mar. 7 (Korea Bizwire) — Many foreign tourists vacationing in South Korea were exposed to a wave of hazardous ultrafine particles that blanketed the nation over the past week, due mostly to lack of information and guidance.

Since last Thursday, most of South Korea has been hit by extraordinarily high levels of ultrafine particles that exceeded the maximum density recommended by the World Health Organization by about six times.

The fine dust density fell to normal levels in many parts of the nation on Thursday but weather forecasters warn heavy dust concentrations are expected to return this weekend.

Despite the seriousness of ultrafine particles, known as a class one carcinogen, many foreign tourists interviewed at Seoul’s major tourism spots mistook smog caused by fine dust concentrations for fog or thick clouds.

A Russian tourist encountered at the ticket office of Gyeongbok Palace in downtown Seoul was surprised when asked by a Yonhap reporter what she thinks about Seoul’s fine dust.

“Is this all smog? I simply thought it was a lot of fog,” she replied.

A 50-year-old man from San Francisco, who arrived in South Korea on Tuesday night, also said he thought the weather was cloudy when asked about fine dust pollution in the capital city.

The American then asked where to buy a dust mask, saying he didn’t know the air in Seoul was bad enough to garner a health warning.

Foreign travelers visit South Korea to enjoy a memorable vacation but are exposed to the dangers of ultrafine particles, unable to get proper guidance from local authorities.

A Thai man who came here with his family on vacation said he was not given any guidance or information on fine dust after arriving in South Korea early this week.

Some foreigners said they received a fine dust warning through their smartphones but were unable to understand the Korean text. Indeed, a woman from Hong Kong who came to Seoul with her boyfriend said she got a mobile text message written in Korean on Tuesday but didn’t understand it.

A man from Osaka, Japan, said he found the air in Seoul was far worse than he had thought. “In Japan, I remember, the air has not been bad enough to wear a mask,” he said.

A mask-wearing British man, who was traveling with his wife, said long-term exposure to the fine dust pollution will surely be harmful to health.

The Myeong-dong street, one of Seoul’s primary shopping districts, was crowded with foreign tourists on Wednesday but very few of them wore a face mask.