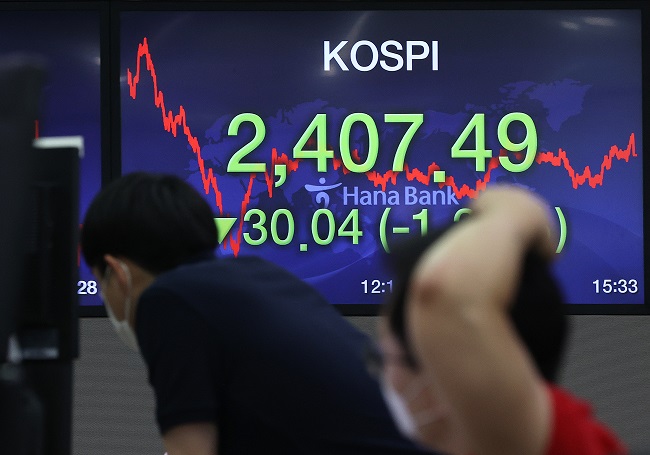 Screens at a Hana Bank dealing room in Seoul show the benchmark Korea Composite Stock Price Index (KOSPI) closing at 2,407.49 on Aug. 14, 2020, down 30.04 points from the previous session’s close. (Yonhap)

The combined net profit of 690 listed firms on the main KOSPI bourse reached 25.54 trillion won (US$21.6 billion) in the January-June period, down 34 percent from a year earlier, according to data compiled by the Korea Exchange and the Korea Listed Companies Association.

Their sales stood at 943.2 trillion won on a consolidated basis, down 5.78 percent from a year ago. Operating profit tumbled 24.18 percent on-year to 42.7 trillion won, data showed.

The sales-to-operating profit ratio reached 4.52 percent, down 1.1 percentage points from a year earlier.

Market watchers largely attributed the fall to the negative impact from the COVID-19 pandemic.

By sector, net profit jumped 150 percent for food and beverages, 106 percent for paper and pulps, and 104 percent for pharmaceuticals. Medical equipment and telecommunication sectors also logged robust earnings despite the pandemic’s fallout.

The profit rate shrank for companies listed on the secondary KOSDAQ as well, but their losses turned out smaller.

The combined net profit of 952 listed firms on the tech-heavy KOSDAQ in the January-June period was tallied at 2.58 trillion won, down 28.34 percent from a year earlier, on a consolidated basis.

Their sales stood at 95.3 trillion won, up 1.99 percent from a year ago, while operating profit dropped 9.11 percent on-year to 4.7 trillion won, data showed.

The sales-to-operating profit ratio reached 4.93 percent, down 0.6 percentage point from a year earlier.