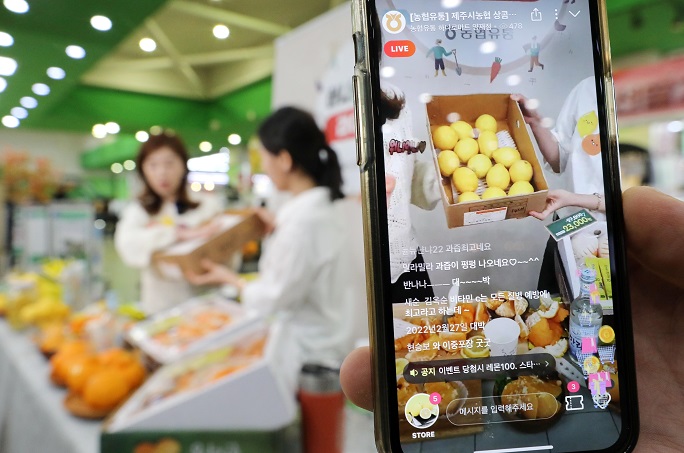 This file photo shows the captured image of its live commerce broadcast. (Yonhap)

According to a survey conducted by the Korea Consumer Agency of 1,500 adult consumers who had purchased products through five major live commerce platforms in the previous year, the overall satisfaction level was relatively high, scoring an average of 3.65 points on a five-point scale.

By category, ‘service level satisfaction’, which deals with the quality of products and inherent services, including auxiliary benefits and streaming hosts, marked the highest score at an average of 3.82, while ‘service experience satisfaction’, which assesses the frequency of positive or negative emotions, had the lowest average score at 3.45 points.

In the meantime, 26.1 percent of the participants noted that they had complaints over live broadcasting.

By type of complaints (multiple answers possible), frequent buffering ranked first with 51.4 percent, followed by the use of absolute expressions (including best, most, first etc.) without objective data at 45 percent, and the exaggeration of product performance and effect at 41.7 percent.

The most popular category of purchase via live commerce for local consumers was food at 51.9 percent, followed by fashion apparel, miscellaneous goods, and jewelry at 19.7 percent, and cosmetics and beauty items at 10.4 percent.