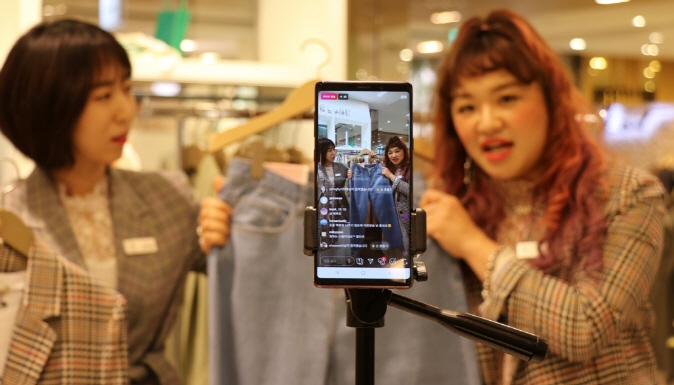 SEOUL, May 26 (Korea Bizewire) — Beset by falling revenues amid the new coronavirus pandemic, South Korean retailers have been struggling to stay afloat by expanding the online sales business amid the non-contact trend.

Now, they are further going online by taking the note of livestreaming shopping tools in a bid to woo more customers.

Live commerce, or TV home shopping-style mobile shopping, has emerged as a potential game changer for the retail sector as it could transform the segment on the back of tech-savvy younger consumers who enjoy video-based content on mobile devices.

Livestreaming shopping brings the format of a TV shopping channel into mobile platforms.

Its main feature is to allow customers to get instant feedback via live chats with a sales host who introduces and sells products. Shoppers can feel like having an in-store experience at home.

Department store operators, which are usually slow to adopt new trends, have been quick in venturing into the new sales platform to shore up their sales.

For department store chains, beefing up the online shopping business has become a matter of survival under the no face-to-face consumption culture. In other word, live commerce could be a good tool to attract more customers, analysts say.

“Live commerce has become a new trend in the retail sector. As non-contact consumption is growing amid the coronavirus outbreak, local department stores have no choice but to follow the trend,” said Park Lina, an analyst at eBEST Investment & Securities Co.

In deed, retailers were one of the sectors hardest hit by the COVID-19 pandemic as people have refrained from visiting offline stores.

The live commerce market, albeit in its infant stage here, has a high potential for growth as contact-free consumption has shot up amid the virus outbreak.

The value of online shopping deals jumped 12 percent on-year to 12.6 trillion won in March and roughly 8.47 trillion won, or 67.3 percent, was purchased through mobile devices, according to government data.

It has aired mobile broadcasts on an application run by Grip, an online commerce platform provider. The company seeks to increase the live-broadcasts by fivefold to 10 times per day.

“Teens and people in their 20s and 30s who are adept at using smartphones are mainly using our service,” an AK Plaza official said. 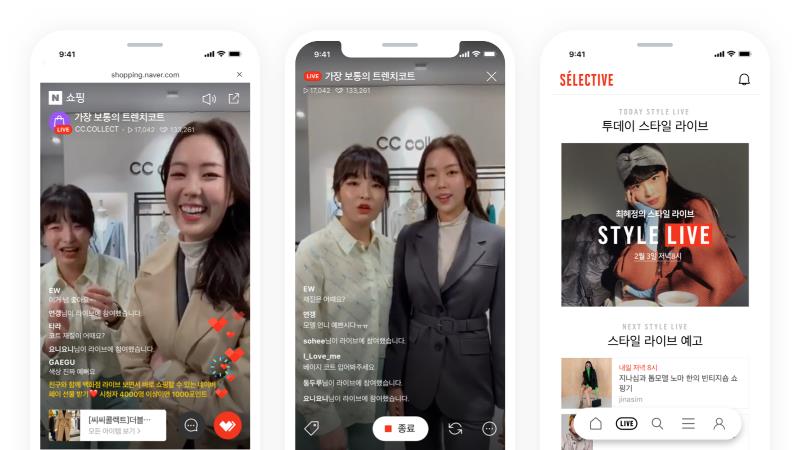 In March, the service had 18,000 views, sharply rising fivefold from three months earlier, it said.

“We will develop fun content that can appeal to the millennial generation in an effort to strengthen live commerce as a new sales channel,” said Kim Myeong-koo, head of the digital business segment of Lotte Department Store.

Shinsegae, which operates its namesake department stores, has invested 26 billion won to set up an affiliate specializing in producing video commerce content in April. The move appears to target live commerce services.

Traditional retailers are aiming to grab the so-called MZ generation, an important clan of shoppers who do not hesitate to spend money for personal satisfaction.

The MZ generation refers to those born between 1980 and the early 2000s as a combination of millennials and Generation Z.

Analysts said competition is likely to further heat up as e-commerce operators and online platform behemoths, including Naver and Kakao Corp., are racing to strengthen the live commerce business.

TMON Inc, one of the country’s major e-commerce operators, has provided the live shopping TVON Live service since 2017. It launched the TIMON Select application in May to allow individual sellers to use mobile broadcasts.

In March, Naver began to enable all sellers registered on its shopping platform, Smart Store, to use live commerce functions.

GS25, a convenience store chain owned by GS Retail Co., will sell 10 lunch menus at cheaper prices via live commerce this week, the first move in the related industry.

“More retailers and online shopping operators are expected to capitalize on the popularity of live commerce,” said Yu Jung-hyun, an analyst at Daishin Securities Co.

“But it remains questionable whether the business would yield profitability due to competition.”