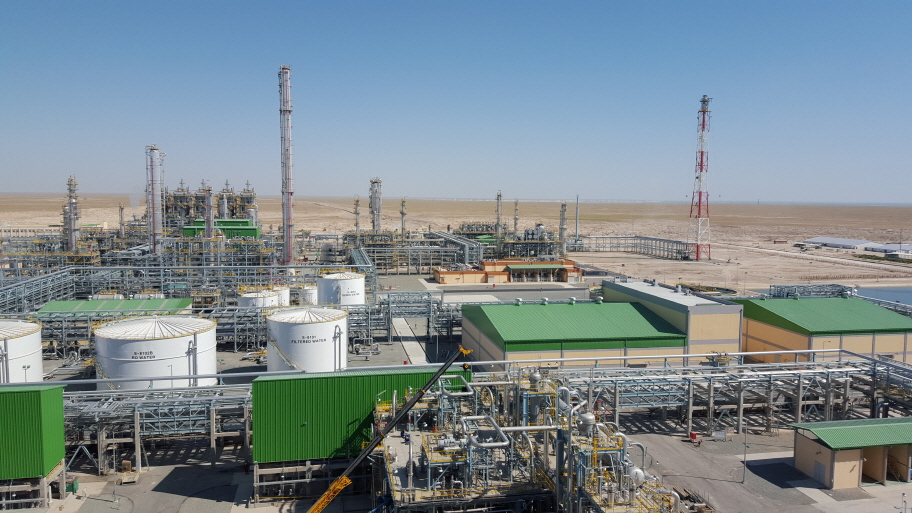 The joint development project, dubbed “the Surgil Project,” was clinched in 2007 between a Korean consortium led by Lotte Chemical and the state-owned oil and gas company Uzbekneftegaz. (image: Lotte Chemical)

SEOUL, Oct. 15 (Korea Bizwire) — Lotte Chemical Corp., the petrochemical unit of South Korea’s No. 5 conglomerate Lotte Group, said Thursday it has completed the construction of a gas chemical complex in Uzbekistan, a major overseas project it has pursued as part of an effort to diversify profit sources.

The joint development project, dubbed “the Surgil Project,” was clinched in 2007 between a Korean consortium led by Lotte Chemical and the state-owned oil and gas company Uzbekneftegaz in a 50-50 ownership to build a nearly 100-hectare production line for high-density polyethylene (HDPE), polypropylene (PP) and gas development.

The new facility has been conducting test-runs and will begin its production in January, Lotte Chemical said.

“We were able to push the project forward with the help of both governments. We’ll strive to take a big leap as a global petrochemical firm with the success in the Uzbek project,” Huh Soo-young, chief executive of Lotte Chemical, said at a press briefing.

Lotte Chemical has pushed for overseas expansion of its petrochemical facilities in Central Asia in recent years, as part of a bid to secure profit sources at reduced costs.

It hopes the Surgil Project will lead the firm to tap deeper into Europe, Russia and North Africa, the company added.

In June, Lotte Chemical said it finalized a 3 trillion-won (US$2.64 billion) joint venture agreement with U.S.-based Axiall Corp. to set up a shale gas-based ethane cracker plan in the U.S.