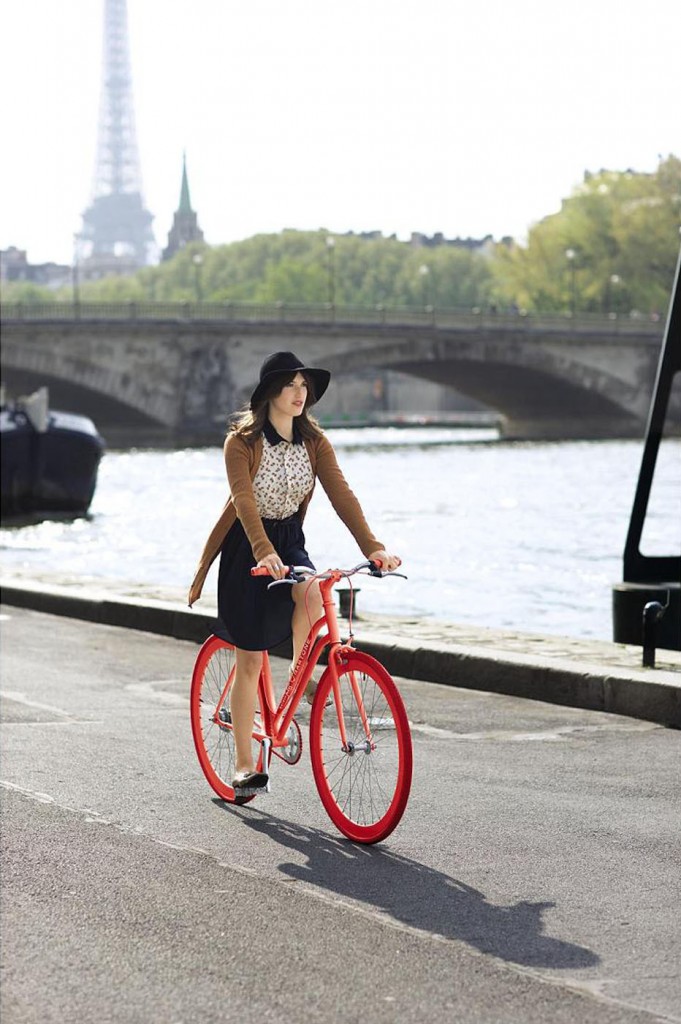 NEW YORK, July 12, 2013 (Korea Bizwire) – Macy’s celebrates the launch of its new Parisian inspired fashion brand, Maison Jules by introducing a limited edition bike, in collaboration with Martone Cycling Company. In step with the current trend of the bike as a key fashion accessory, the collaboration has resulted in the creation of a custom “Maison Jules X Martone” bike. Beginning August 1st, 151 bikes will be displayed alongside the collection in Macy’s top doors carrying the line. Each of those 151 “Maison Jules X Martone” bikes will be given away to a lucky customer who has won a store-wide sweepstakes.

Feminine, elegant and edgy, Maison Jules targets the fashion savvy Macy’s customer who is hip and trendy but has her own individual taste. Drawing inspiration from casual chic French styling, the collection is composed of key wardrobe staples that can be cultivated into multiple looks.The “Maison Jules X Martone” collaboration merges Macy’s new Parisian street style fashion brand with an authentic street accessory for the girl on the go.

The exclusive, limited edition bike is offered in an exclusive coral shade; a key color found within the Maison Jules fall line. Each of the 151 custom Martone bikes will be awarded to one lucky winner per store through an in store text to win contest. Customers can enter by texting the unique code for their store, found in the Maison Jules shop. There will also be a style contest conducted via Instagram in September, in which one grand prize winner will be awarded a trip to Paris, a “Maison Jules X Martone” bike, and a Maison Jules wardrobe valued at $500.

“We are thrilled to collaborate with Maison Jules, and created a bike that became an accessory for this girl: fashionable but dynamic, bold but feminine,” says Martone Cycling Company’s founder, Lorenzo Martone. “We believe in individuality and that everyone has a creative vein, so we are looking forward to seeing the results of Macy’s Instagram contest, and want to wish luck to all of the participants.”

Maison Jules will launch exclusively at Macy’s on August 1, 2013. The brand will be available in Macy’s Impulse departments and will feature a selection of tops, sweaters, dresses, and pants. Ranging from $17.50 – $119, Maison Jules will bring a uniquely French flair to fashion customers across the country.

About Macy’s Macy’s, the largest retail brand of Macy’s, Inc., delivers fashion and affordable luxury to customers at approximately 800 locations in 45 states, the District of Columbia, Puerto Rico and Guam, as well as to customers in the U.S. and more than 100 international destinations through its leading online store at macys.com. Via its stores, e-commerce site, mobile and social platforms, Macy’s offers distinctive assortments including the most desired family of exclusive and fashion brands for him, her and home. Macy’s is known for such epic events as Macy’s 4th of July Fireworks® and the Macy’s Thanksgiving Day Parade®, as well as spectacular fashion shows, culinary events, flower shows and celebrity appearances. Macy’s flagship stores — including Herald Square in New York City, Union Square in San Francisco, State Street in Chicago, Dadeland in Miami and South Coast Plaza in southern California — are known internationally and leading destinations for visitors. Building on a more than 150-year tradition, and with the collective support of customers, employees and Macy’s Foundation, Macy’s helps strengthen communities by supporting local and national charities giving more than $70 million each year to help make a difference in the lives of our customers.