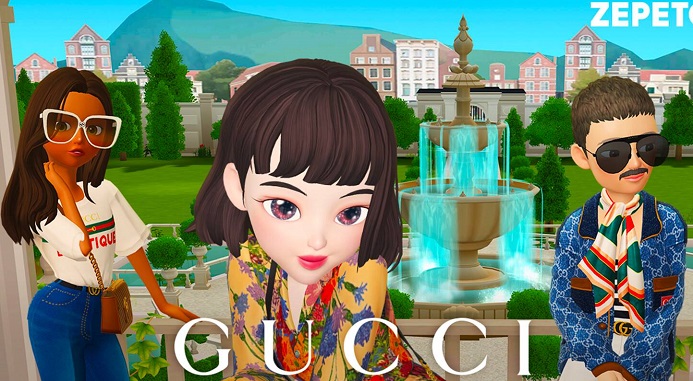 This image provided by Gucci shows the luxury brand’s collaboration shops on ZEPETO.

SEOUL, May 21 (Korea Bizwire) — The fashion industry is turning to “metaverse” marketing as the three-dimensional, virtual space is rising as an alternative social platform.

The metaverse refers to a shared virtual space, in which users interact with each other through digital avatars and experience a virtual reality (VR) world.

Gucci, Nike, and Puma are some of the major fashion brands that currently run collaboration shops on ZEPETO, where users can spend in-app purchased GEMs or coins to buy clothes, shoes, hats, and accessories for the avatars.

The clothes and handbags available at ZEPETO are replicas of real products currently being sold or to be sold in the near future.

As more people are joining ZEPETO, some brands are choosing to reveal their newest products on ZEPETO.

Christian Louboutin’s high heels with leopard print or spikes and its newest line-up of sneakers, revealed for the first time on ZEPETO last autumn, were released as real products in January of this year.

The fashion industry’s particular attention to ZEPETO is attributed to its young members from Generation Z, including teenagers.

They are future consumers with high interest in fashion as well as strong purchasing power potentials.

Among ZEPETO’s 200 million members worldwide, 80 percent are from Generation Z.

Users can create their own avatar costumes for sale. Around 7,000 to 8,000 fashion items are being posted on ZEPETO every day, allowing possibilities for fashion items generated inside the ZEPETO World to be released as real products.