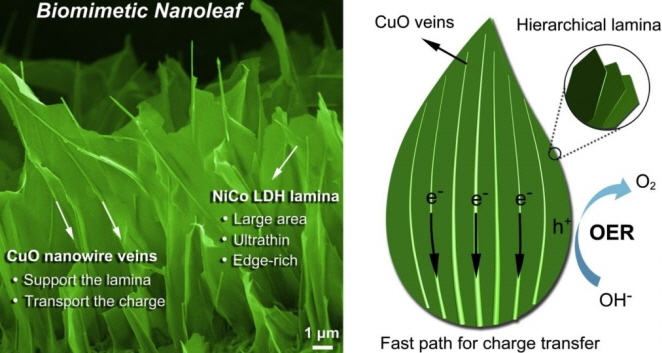 POHANG, Aug. 23 (Korea Bizwire) — A nanoleaf catalyst that follows the principle of photosynthesis to create hydrogen energy has been developed by a South Korean research team.

Researchers at Pohang University of Science and Technology (POSTECH) imitated the mechanism of a monocotyledon to create a biomimetic nanoleaf electrocatalyst that accelerates the generation of oxygen during water electrolysis.

To acquire hydrogen energy, known as a clean source of energy, water needs to be split into oxygen and hydrogen.

Water electrolysis works based on the reactions from catalysts for hydrogen and oxygen evolution.

Many scientists have been making extensive efforts to develop catalysts for oxygen evolution, which is known to be relatively less prone to reaction than hydrogen catalysts.

The research team drew inspiration from photosynthesis among monocotyledonous plants, which efficiently distributes water and nutrients through leaf veins, to develop the nanoleaf.

The team placed layered double hydroxides that function as a leaf’s body on top of nanowire made of copper oxide that mimics a leaf’s veins.

The biomimetic nanoleaf electrocatalyst uses the expansive surface area of the layered double hydroxide to boost the generation of oxygen.

Nanowires then swiftly send the electric charge to increase the efficiency of oxygen generation.

The team claimed that the biomimetic nanoleaf electrocatalyst is 9.3 times more effective than other catalysts.

“We hope to use the nanoleaf catalyst to generate hydrogen energy,” said Prof. Yong Ki-jung from POSTECH.