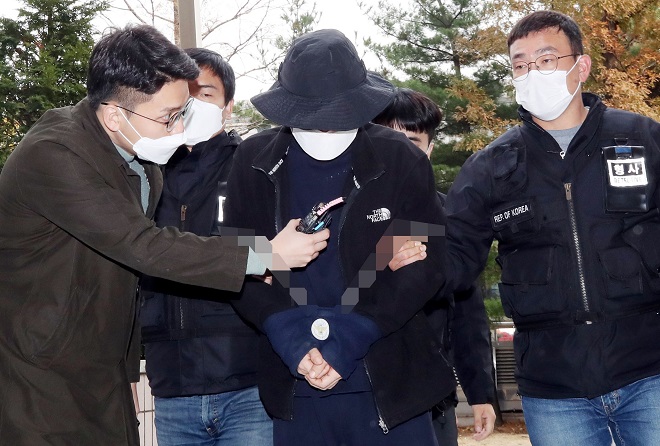 This image shows a man convicted of attempting to kill all three members of a neighboring family over a noise dispute at their apartment building in Incheon, west of Seoul. (Yonhap)

SEOUL, May 28 (Korea Bizwire) — A court on Friday sentenced a 49-year-old man to 22 years in prison for attempting to murder all three members of a neighboring family over a noise dispute.

The man, whose identity was withheld, allegedly stormed into the family’s home on the third floor of an apartment building in Incheon, west of Seoul, in November last year and went on a stabbing spree.

The mother, in her 40s, was stabbed in the neck and underwent an operation for cerebral infarction but was left seriously incapacitated, while the husband and a daughter sustained wounds to the face and hands.

The convict, who was living on the fourth floor of the same building, had been in an inter-floor noise dispute with the family since he moved in about three months earlier.

During court hearings, he admitted he attempted to murder the mother but refuted the attempted murder charges involving the other two.

The Incheon District Court dismissed the argument and convicted him of attempting to murder all three.

“Seized with a delusion that the victims downstairs deliberately make noise, he decided to murder them and went on to commit crime,” a judge said, adding the horrendous results of the crime warrant a stern punishment.

The court also ordered him to wear an electric monitoring anklet for 10 years.

The case drew national attention for a bungled police response.

Two police officers were sent to handle the knife attacker but left the family to handle the scene alone, in order to call for help.

The two officers were dismissed and are currently under a prosecution investigation on charges of dereliction of duties.

National police chief Kim Chang-yong has apologized over the case.